Blackpool After the Parade

A couple of days ago I published an entry about a Marching Bands Parade which took place on the 26 July 1981. 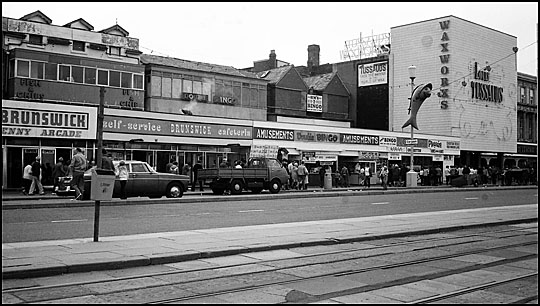 Once the parade was over I turned the camera onto Blackpool itself and a couple of entries have already used some of those photographs. Cinema USA was an inflatable dome on the Central Pier which showed short films on a large scale (the wall of the dome was the screen) before IMAX came along. The other entry - Blackpool's Golden Mile 1980s Style describes how the Golden Mile evolved from house gardens to the ramshackle add-ons and extended porches that we see in the above photograph and described some of the activities you may have seen in the heyday of the Golden Mile in the 1930s.

By 1981 many of the old Edwardian penny slot machines had gone. There were still the odd one or two knocking about but most of the All-Win flick-ball machines had disappeared and the old pinballs without flippers from the 1940s and even the 1950s wooden-railed pinballs had disappeared. Pinball was experiencing a bit of a heyday though. The move from the old electro-mechanicals (where electricity powered lots of relays and levers) to electronics (which had computer boards inside) was well underway and the newer games allowed more than one player to compete with each other with the game able to remember all the previous achievements of the player. 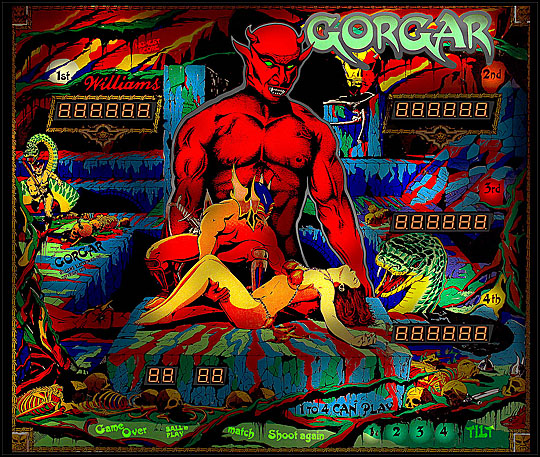 In 1979 Gorgar became the first pinball to speak - though its vocabulary was limited to just seven words which could be delivered in various combinations "Me Gorgar, beat me" to "Me got you" to "You beat Gorgar" with the initial deliciously chilling phrase uttered when you pushed a coin in: "Gorgar speaks!". The other word in the vocabulary was "hurt".

It was not unusual to see a row of 15 pinball machines in arcades at that time. They were fun, they required skill and they were a nightmare to keep in good working order. They started to disappear once video games came out in greater variations than the tennis game. But the impact that the tennis game with its two rectangles for bats and a square ball was unbelievable. People queued up to have a go as they previously had for the better pinballs. It was practice to place your coin on top of the machine whilst a player was playing their game. The popular machines could have a whole line of coins and people standing waiting. 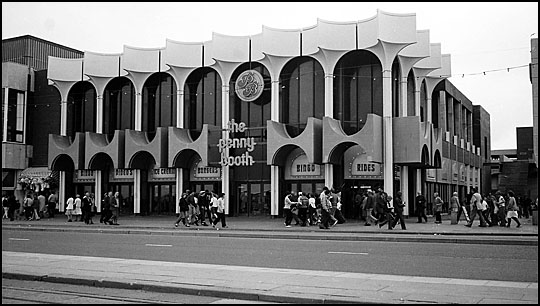 For the Golden Mile itself, the future would look more like this. The old houses swept away and a purpose-built arcade with modern styling and neon signs erected in their place. The Penny Booth would later change its name to Funland and the old style of arcade would eventually disappear altogether. Inside the atmosphere changed as the electronics machines filled the air with piercing shrieks and snatches of tunes. High pitched sound effects, amplified to annoying levels for anyone who wasn't actually playing, replaced the gentle gongs and chime bars of pinball and the soft mechanical whirrs and kerchunks of one-armed bandits.

Jukeboxes, which had been a feature of most arcades (seldom played loud as it stopped you having more than one to take money) almost disappeared overnight from the Golden Mile. Arcades became far more than in the past a haunt of the teenager only. 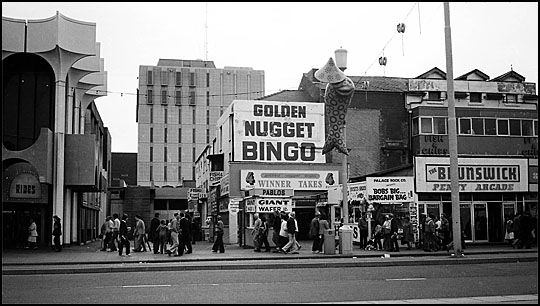 The Golden Nugget Bingo was a poor substitute for the fantastic billboards claiming (but not really delivering) the flames of Hell in Dante's Inferno or the Two-Headed Giantess. Perhaps the Trades Descriptions Act of the late 1960s did for Chard's Theatre in the end. Or perhaps the police, from their new headquarters in New Bonney Street in the rear of the photo were now close enough to take an active distaste to the shows which were hinted at on the hoardings with phrases such as "The naked truth!" or "In the flesh!" or "Laid bare to be seen!"