A Day on La Palma

7 March 2004. Santa Cruz de la Palma is the capital city and port of La Palma, one of the westernmost of the Canary Islands. It is to this teardrop shaped island that we have sailed overnight.

Fran woke first and said "Have we docked yet?"
I admitted I didn't know and she whisked back the curtains on the cabin porthole then shrieked at the sight of a much taken aback harbour pilot who was standing on the deck of his pilot boat about three feet away from her naked self... He could probably only see her face and shoulders but since that day Fran has been careful how she looks out of a ship window first thing of a morning... 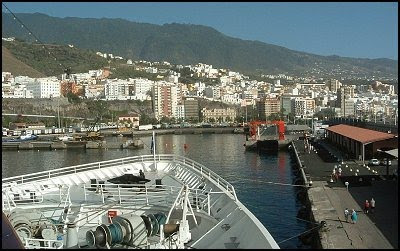 By the time we were dressed and up on deck, the sun was out and blazing merrily down at the cruisers onboard, who by now are various shades of pink to bright-red-with-blisters... The bodies beautiful are still hard to find amongst the bodies crinkly. 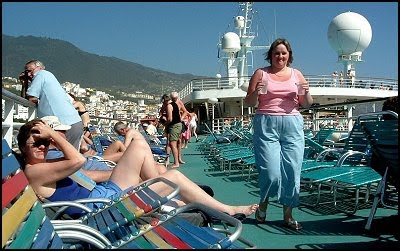 We are booked on a half day afternoon excursion, so it is a lazy morning sunning ourselves and reading. Here Fran has gone for a couple of glasses of iced water - hopefully a bit fresher than the harbour water below which has a trail of rather disgusting looking stuff which has floated our way from a cargo ship moored at the other end of the dock... 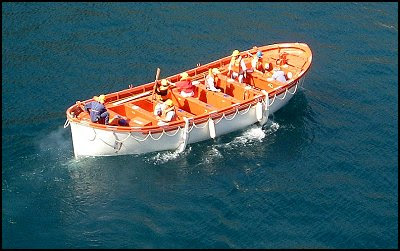 The crew are playing on the lifeboats. This is described as a drill and is no doubt serious stuff, but it still looks good fun!

Ok! The morning has gone and we must stir ourselves for the afternoon coach trip. 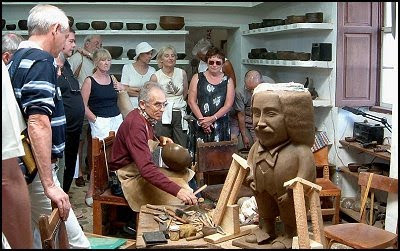 Our first stop is at a ceramics studio, where this chap is taking a break from making hundreds of little pirates - and one big one, obviously, to make a bowl in the manner of the ancient indiginous inhabitants of La Palma. As it's a volcanic island, I'm not sure how it could have indiginous anything except lava flows, but perhaps they mean the first ones to land after the fire went out...

Our next stop is at a local vineyard where the courier helpfully described the paint thinners posing as red wine as "not quite full bodied..." I should say not and to avoid litigation have avoided posting any photographs of the location or the grapes which the local goblins fill with vinegar every night. Moving swiftly on, we arrive at one of the island's volcanic craters. The volcano, San Antonio last erupted in 1677 and was peaceful as far as any fire and brimstone was concerned.

The wind though was unbelievably fierce, threatening either to blow us into the crater or down the side of the volcano into the sea far below. 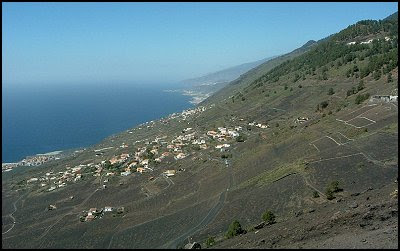 This was the view looking away from the bowl of the crater and either side, it was a heck of a long way to be rolling down razor sharp volcanic rock! Not a bad place though to tip any wine you may have bought without tasting it... Final stop was at a small village with a small park laid out with mosaics and stone patterns. La Glorieta was the name of the park and admission was free and (Oh no!!!) there was a wine museum just 100 meters away.

It was extremely hot. Hot enough that you'd think the volcano could have rekindled itself, but we got back to the Carousel without any mishap or seismic phenomena.

Tonight will be special and not just for the harbour pilot... Apart from breakfast, elevenses, lunch, afternoon tea, and main dinner, there is a midnight feast! Not to be missed!
Posted by John Burke at 21:44