Ages since I added to the occasional series of Vanished Blackpool so here's a quick one to savour! 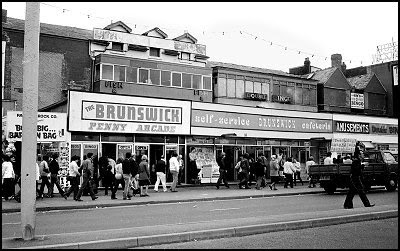 Savour may not quite be the most apt word, and I'm not sure I should have used style in the title as the Golden Mile in July 1981 showed little flair for style.

The buildings had originally been houses - you can spot gable ends towards the right. The original Golden Mile started as stalls in front gardens. The householders sold drinks for the beach and were so successful that they learned that if they knocked down their garden fences or railings and let out the front garden they could earn fortunes.

Drinks stalls were joined by quack medicines, sideshows, and some really tasteless stuff. One not-so-rich newly wed couple spent their honeymoon in a glass case "Starving to Death for Love", just one of many questionable shows which included the (arguably wrongly) defrocked Rector of Stiffkey, who exhibited himself in a barrel. He later died in the jaws of a lion in Skegness when, whilst preaching from inside its cage, he inadvertantly trod on its tail...

But despite the boarded up windows and horrendous dilapidation of the upper storeys of the buildings, I always think of this section as the last bit of the Golden Mile with character...

There was an excellent burger bar there too before burgers became the bland stuff you get at franchise burger bars these days. Fried onions and ketchup with none of this cheese and salad and grated onion nonsense! The late 1970s saw a rapid decrease in the small independant burger stalls. New Trade Description laws meant that the term hamburger had to disappear - as burgers were made with beef - and a new word beefburgers appeared on the menu.

Large version of the photo: Golden Mile
Posted by John Burke at 10:03