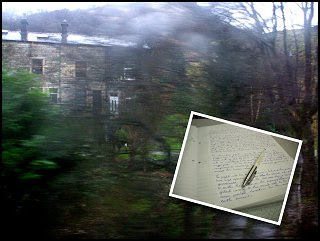 A more unlikely express is hard to find possibly, fast it is not, but there is something about the train journey across from Blackpool to Hull.

Not that I've ever travelled that far on it, but the other day I took the train to York and used the time to write up an activity scenario for a new workshop that we are planning to run at work.

The weather was a trifle wet - probably not quite as wet as it has been in lots of other areas of the country, but bad enough. Once you get to east Lancashire and then Yorkshire and are climbing up and over the Pennine range of hills, the views from the window on the Trans-Pennine route can be stunning.

Steep dark hillsides climb up and then engulf you so that the train has to travel through tunnels bored into the imposing crags and turfed peat and rock.

Particularly after rainfall wild tumbling streams flash past, most times only glimpsed as they have spent centuries cutting deep grooves and gulleys into the hill so that you just catch a quick flash of white and silver just a few yards from the window as you rush by.

It is Britain's answer to the Atchison, Topeka and Santa Fe, with station names like Hebden Bridge, Mytholmroyd, then Halifax with the big signs for Eureka!

"What's that?" someone says and is immediately answered by a young mother.
"Oh it's a great place for kids - lots of interesting things to do and see and get involved with." It's a science playground.

Then Bradford Interchange, where the train goes in forwards but comes out backwards - a nightmare for anyone who likes to sit facing a particular way. Leeds is next, approached at high level on the viaducts, then Garforth and York.

During the latter part of the journey the steep hills are replaced by wide valleys. The wide rivers afford a different view. The Wharf in particular, is worth a moment to look up from your book.

There aren't many great train journeys in this country - feel free to suggest some. This is one.
Posted by John Burke at 10:47