The Pyramids of Giza

Saturday 24 April 2010. After our morning looking at the stepped pyramid of King Zoser, we were to head back to Cairo to see the famous pyramids at Giza. 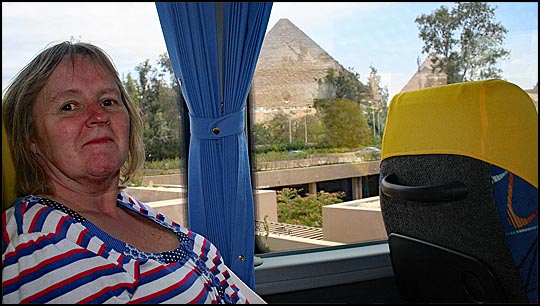 We were surprised to see just how close to the outskirts of Cairo the pyramids really are. But before we get to see them up close we have a stop at a restaurant for lunch, together with several other coaches, each with their armed security guard. Ours was ok - he didn't speak English but was quick with the smiles and he went to sleep on the seat in front of us with his holstered gun sticking between the seats right in front of us. I could have drawn it far quicker than he could have...

I did the same trick again with the glasses - left my sunglasses on and the normal glasses on the coach. Therefore once in the fairly dark restaurant I stumbled about gathering weird buffet concoctions onto my plate - cheese with sardines and pasta with waiter's cleaning cloth... I managed in the toilets ok - someone screamed at one point but it was a chap, so I knew I'd gone in the right door...

Fran was chuckling when I came out. "One of those blokes with a gun just came out with wet streaks all down his trousers... here... don't rush me... What's the hurry?!?"
"Come on," I urged, "We don't want to miss the bus!" 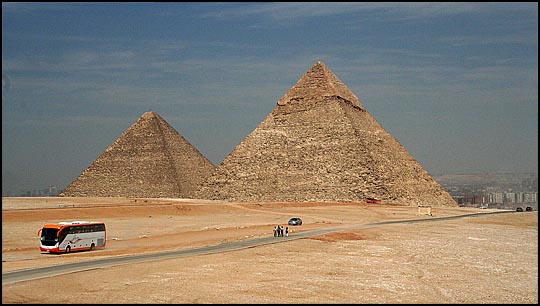 Then onto Giza and the most famous pyramids of all. There are 140 plus pyramids dotted all over Egypt but how many of you could name them all and spell them correctly? Me neither... 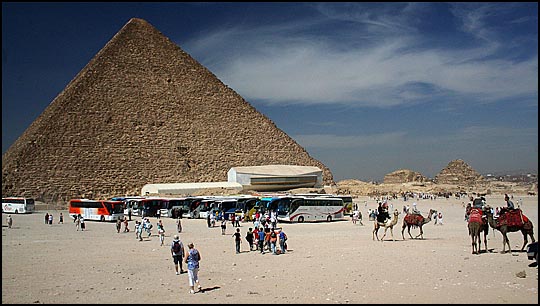 Lots of camel jockeys, postcard and jewellery sellers, enthusiastic would-be guides. Most Brits make the mistake of saying a polite "No thanks..." which results in the invisible glue between yourself and your new best persuasive buddy getting stronger. Best way to avoid them is to ignore them totally. It's their culture. They find ours just as mystifying. "Hey if we just ignore them maybe they will come to us and ask to buy!" "Oh yeah, right, sure - I think your brain fell off with your fez!" 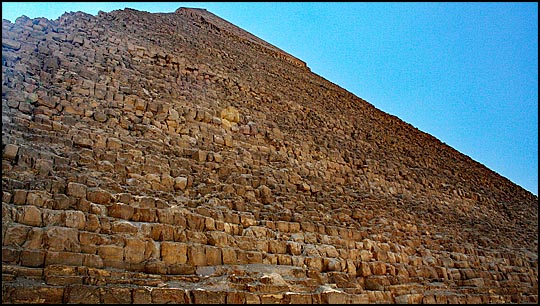 Luckily there are Tourist Police here to protect us. One saw Fran stumble and indicated a safer way down from a pile of rubble. Then he grabbed her arm and led her off away from me to look more closely at the stones of the Great Pyramid. I uttered an authoritative "Fran!" and he let go, cursing me that I'd realised he was about to charge around 20 euros for whatever insignificant fact he was about to impart... They are all at it! 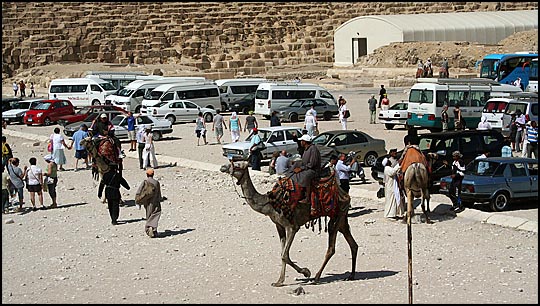 There are three major pyramids here, the Great Pyramid of Khufu (Cheops in the Greek) which is the only survivor of the Seven Wonders of the Ancient World, at its side that of his son Khafre, which is the one with the cap of facing stone still in place. Further to the side is the pyramid of Menkaure. Smaller pyramids at the base of the large ones are tombs of queens and princesses. All around are lesser tombs and mastaba of court officials and followers. 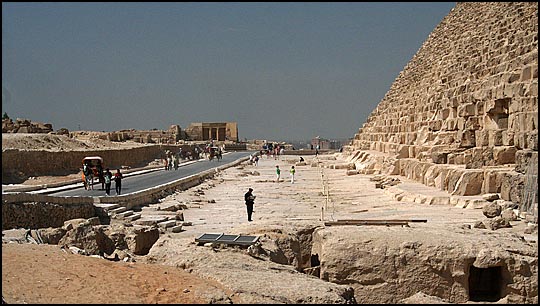 We wandered around the pyramids and piles of attendant rubble for a while until the colour of my shoes had changed to the colour of our surroundings. When it started to creep up my legs we headed back to the bus which was now about to head slightly down the hill to another ancient monument that I had wanted to see for a while. 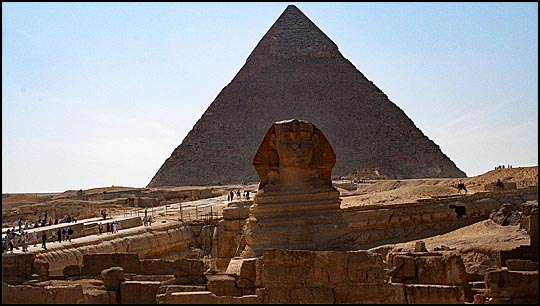 The Sphinx pre-dates the pyramids by a couple of thousand years. It wasn't built to guard them at all but it is possible that they were built to be guarded by it. Not necessarily though - if you look at any Egyptian image of a bird, god, animal, or person it will be a profile - a sideways view. So the Sphinx is definitely not intended to be guarding the pyramid that sits right behind it. 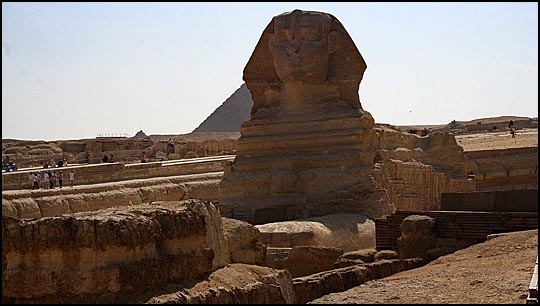 Nor, apparently, was its nose shot off by Napoleon and his band of lager louts on their away tour through Europe. It was depicted in drawings as early as the 1300s AD with no nose. I was rather disappointed by the Sphinx I am sad to relate. For one thing the sun was behind it so it wasn't all that easy to see any detail on it - I've increased the contrast of the photo by several times to get it as clear as this. But also it's smaller than I imagined. The head is incredibly small for its body and it is thought by some that it did have a lion's head originally to match the body but that some lordly "Hey look at me, I'm a Pharaoh!" type such as Rameses II had the head re-whittled in his own image. 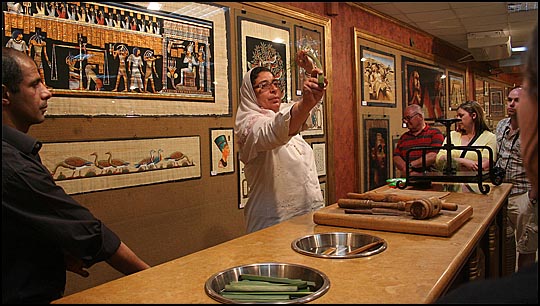 Guide, Manal demonstrates the flexibility of a papyrus stem prior to us being shown how the Egyptians made papyrus paper. Then it was back through the Cairo traffic. Ha! This has to be seen to be believed. And I thought it was bad in Naples or around the Arc De Triomphe roundabout in Paris! 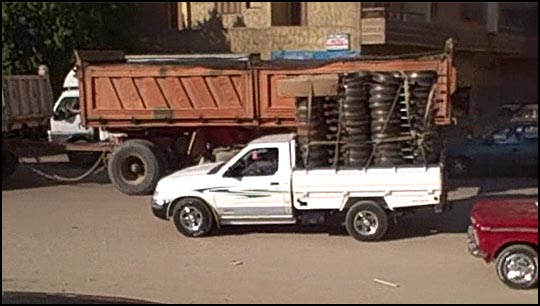 Cairo traffic is a doozie! Almost as entertaining as the Pyramids themselves... And why did most pick-up trucks have either a couple of cows in the back or a pile of stuff reaching as high as a double-deck bus? 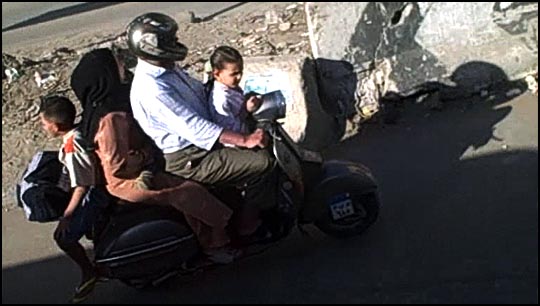 Once on the freeway on the way back to the port, a siren-blaring military-looking police van with three armed guards in the back waved us into the kerb and then led us in a convoy of coaches back through the traffic, which was stopped at every junction to let us through unimpeded. This apparently is a regular occurrence and has been for a number of years but when you're not expecting it is a bit of a facer. Fran described it as "a bit scary" but the armed escort on the seat in front of me didn't seem worried and the guards in the back of the open truck in front looked bored so I wasn't too bothered. Although if they had marched us off to a brick wall whilst handing out blindfolds, our friend in the seat in front would probably have just joined them and taken aim...

We got back to the port and ignored the vendors wanting to sell us more souvenirs. "Two Euros for you all to go back to England!" muttered one as a joke for his mate. They'd had a long day at the port. "Ten!" I tossed back, wittily...

Return to Palace and Pyramids Index Page
Posted by John Burke at 11:28