This post brings us up to date so after this you'll have to wait until I get drawing a bit more! 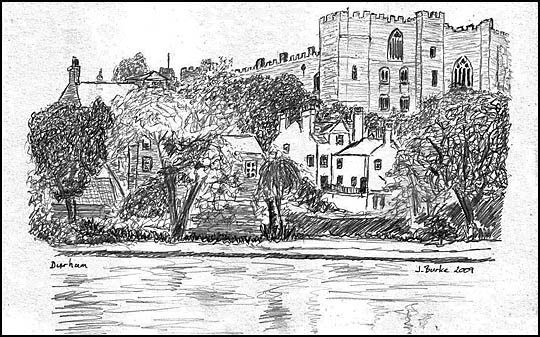 In 2009 we were invited to a work colleague's wedding reception which was held in the impressive Durham Castle. The morning after, before heading homewards, Fran wanted a look round the shops and I went down to draw this sketch of the castle from the opposite bank of the river. It was done in my A5 pad and whilst it rained a bit during the sketching, I managed to dodge the ferocious bits under a nearby bridge. 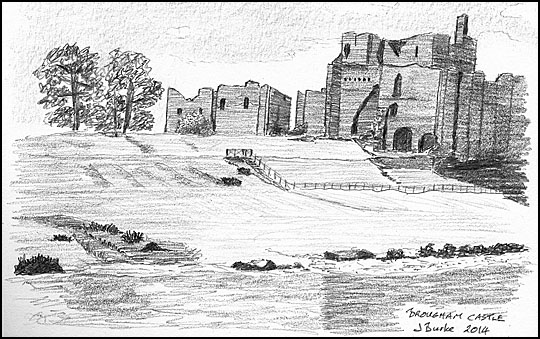 Brougham Castle, done from one of my own photographs. There's another entry about this sketch, linked from the Index Page, that shows some of the stages I went through. 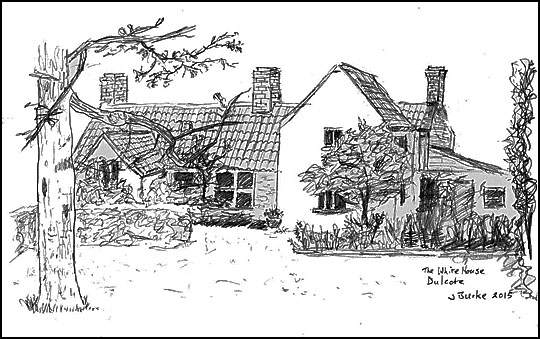 For a few years, my sketching was limited to holidays and were all done abroad so we move to 2015 when we stayed for a weekend with an old friend and colleague at her guest house in Dulcote, near Wells in Somerset. The surroundings, Dulcote village and the historic house which was the guest house made it a great weekend and this was done from Mary's summer house in the garden not long after we arrived. The White House, Dulcote - I heartily recommend it! 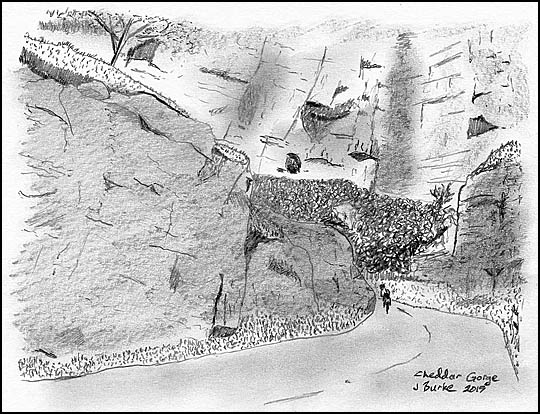 Whilst we were there, there was just one afternoon when the weather decided to do the nasty on us. We had been to Glastonbury in the morning and in the afternoon had driven to Cheddar Gorge, but the weather drove us into a crowded café where we dried off a little and sat trying to identify old Golden Age Hollywood stars from a collection of cigarette cards from the 1940s. I drew this later from a photo and added the cyclist because there was a cyclist staying at the guest house who had cycled up the gorge the previous day. 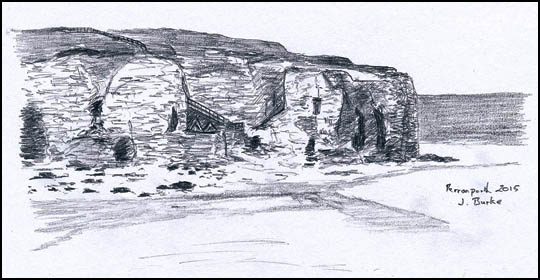 Later that year we took a long weekend down to the haunt of teenage and early family holidays in Newquay and tried out the hills on our legs which were now 40-50 years older! This was Perranporth beach with the line of cliffs down the southern side where the sea has carved them into some interesting shapes including arches. 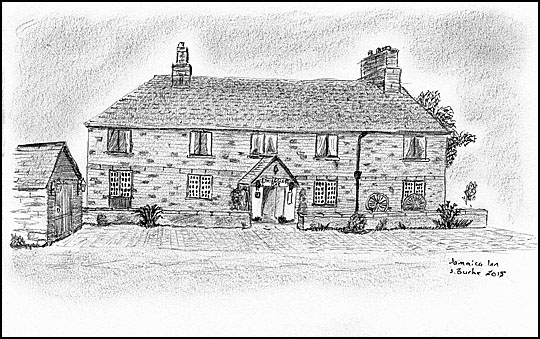 We called one night at Jamaica Inn on Bodmin Moor and had our evening meal there. The talking (swearing...) parrot we remembered was no more sadly, but the place still has tons of atmosphere. I remembered our daughter being most indignant there one year as she was reading Daphne du Maurier's book and came across a plaque that contained a huge spoiler for her! 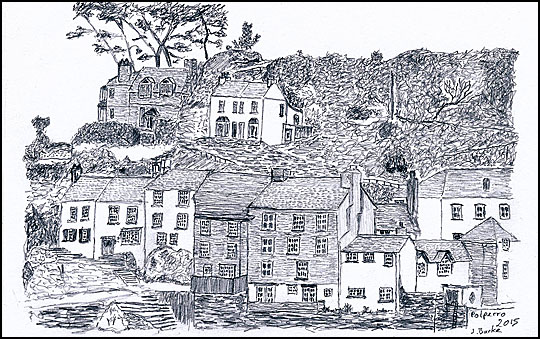 This sketch of Polperro was a sketch done in two halves due to rain. As we dashed into a nearby café, sketch book flapping, loaded down with pencils, buckets, spades - well perhaps not, I was 61 at the time... - the café owner caught sight of it and said "Ooh! That's good!" Luckily I managed to get back to almost my original spot to finish it after lunch when the sun had once more made an appearance. No one actually came to talk to me, but I overheard some very nice comments from behind me. If this had been any other country I'd have been trying to understand conversations in a few different languages. 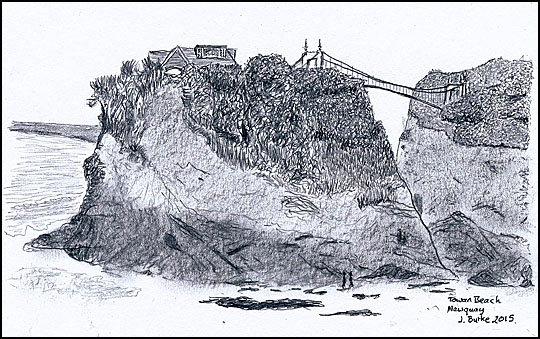 This one of Tolcarne beach in Newquay - the beach with the island - was done with the only company being a hopeful seagull. Every now and then it chittered at me, but as I wasn't eating and had no food on me and mostly as I never feed seagulls because they get aggressive if taught to expect food from humans, it remained disillusioned about the human race. It was bitterly cold which may explain the lack of any other people about the place but the solitude was worth it as we went from there into a restaurant that served the most enormous steak in ale pie. I was still filling in the darker bits and the barman, wandering past, did a double take and said "Have you drawn that???" in an astonished tone. Meanwhile the seagull was tapping at the window and shouting "You bastard!" as we tucked into the pie and chips. 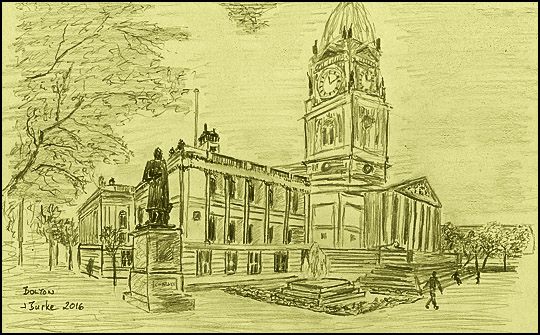 You win some and you lose some... A bitterly cold February morning in Bolton without either camera or sketch book prompted me to find a photo on the Internet and draw Bolton's town hall from that. Heaven only knows what happened to any attempt at perspective, that tower looks like the house that Jack built... Fail... 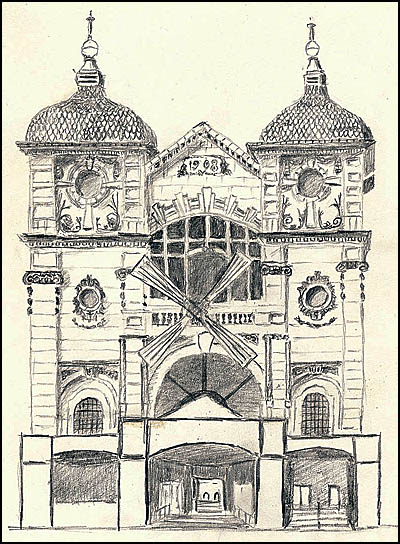 Saturday 11 August 2018. I was back sketching outdoors in situ again. The Windmill Theatre in Great Yarmouth on a scorching hot day. It took a couple of hours and I had to make up the interior of the ground floor as it is now an indoor Crazy Golf(!) Done with a local who kept coming for a look then going home to his house on the next street for another can of beer. This at 10:00 am. He was ok, if a little drunk and the smell of beer meant he attracted the wasps and not me... Late on in the process he disappeared then came back with a load of old postcards of the town to show me. Sadly none showed the front of the theatre, but then I imagine it would have been covered in billboards with portraits and lettering and I hate doing lettering! 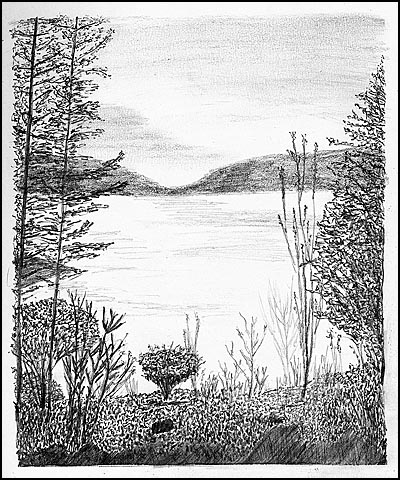 Done on Boxing Day 2018 whilst we had a short lull, waiting for family to arrive. It was done in my A4 sketchbook which had been a Christmas present the previous year and was done from an old photo of Thirlmere in the Lake District. 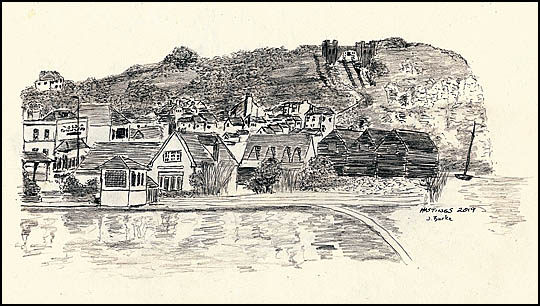 And finally for this time, here's Hastings on the south coast, well known for sea, fun and invading Normans. (Get off, Norman!) Drawn a mere 13 weeks ago during that rather intermittent summer we had this year. We were staying in Eastbourne and had taken a bus to Hastings. They made me take it back...

Return to Sketching and Artwork Index
Posted by John Burke at 11:37