Amongst all the many sentimental treasures discovered following the death of my uncle earlier this year was a photo album belonging to my grandmother. Labelled in her handwriting the inside front cover proclaimed "Annie Burke, 1927" and approximately half of the pages contained photographs most of them labelled (yahoo!) with dates and place names but sadly not with the names of the people shown... Take back some of that "yahoo"! The photos I have scanned so far date from between 1918 and 1927. 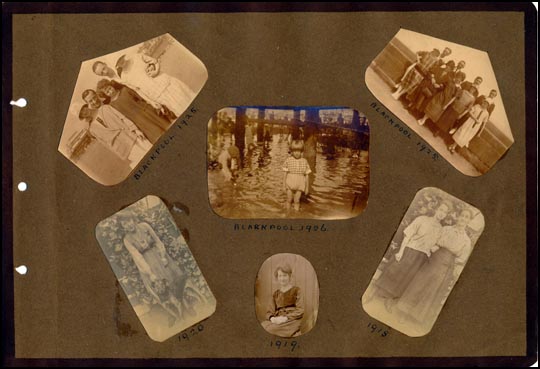 Some of the photos are very small. An inch along the longest edge. Most have been closely cropped with a pair of scissors. Some are sepia toned. Some are black and white - well... grey and lighter grey... Many show areas of damage from fogged light on the film, wear and tear, stains and cracks or fold marks. I've spent some time preparing them therefore and the following photographs and those of the follow-on articles (there will be a few...) have been repaired as best I can and are presented in a consistent sepia tone. 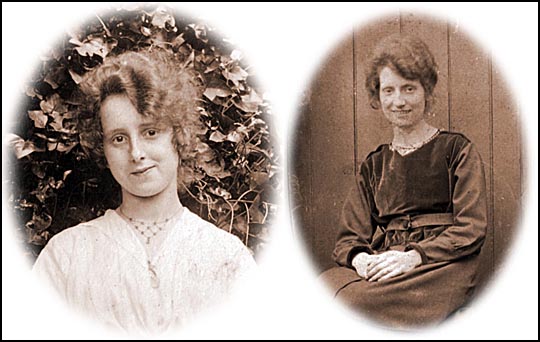 On the left is a 1920 photo of Annie Brierley, who in 1921 would marry John (Johnnie) Burke and then in time become my grandmother. Until this year I had never seen any of the photographs in this article. Apart from family members who I personally remember in their later age, I had never looked on some of my forebears that appear here. On the right is Annie's sister Elsie, who I would know as my great-aunt. This photo was taken in 1919. 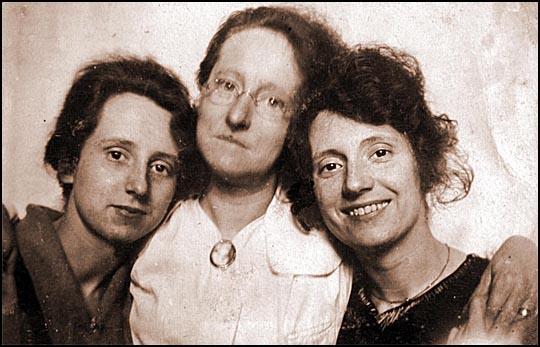 Here are the girls again with their mother, Margaret (Maggie) Brierley who I would know as (Great) Grandma Brierley. The photo was taken in 1921 and both girls were to marry within a few months, so perhaps a last chance to be photographed as "Brierleys". 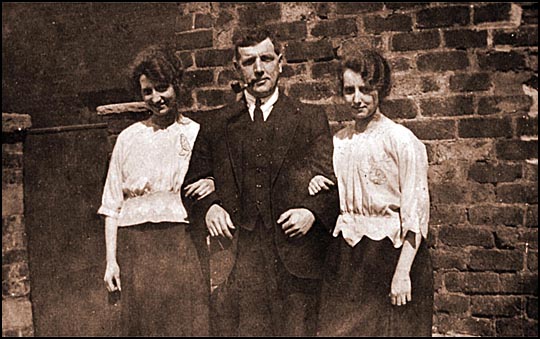 A different occasion but also from 1921, the girls are seen here with their father, who died before I was born. Until recently I had never seen a photo of him and I'm afraid I still don't know his name. 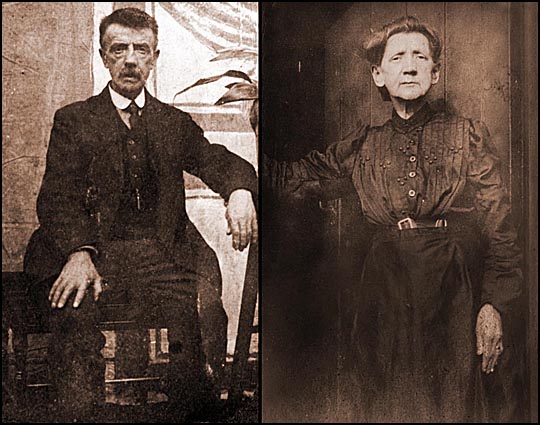 Two unknowns I'm afraid. They could be Maggie's husband's parents, or Johnnie's grandparents perhaps - the man has a slight resemblance. It's equally possible that they weren't even related to each other... The man's photograph is dated 1919 and the woman's photo a year earlier in 1918. 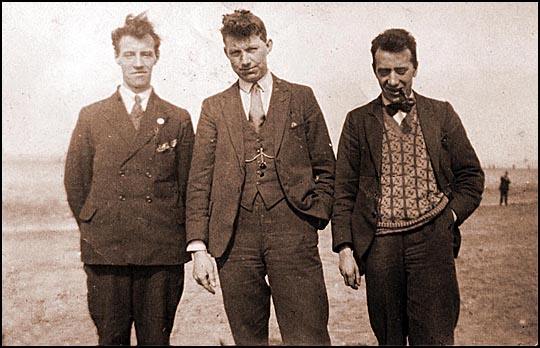 I have no idea who the man on the left is, but the other two are (centre) Percy Alston, my great-uncle, who I remember as a very jolly chap. The photo was taken on Morecambe beach in 1927, so by this time Percy was Elsie's husband. I've mentioned him on this blog before - he ran a photographic shop on Spotland Road in Rochdale through the 1950s and 60s and they retired to a bungalow in Overton, near Morecambe. On the right is my grandfather John Burke, for whom I was named. A pipe smoker, he kept the habit all his life, preferring flake tobacco which he would rub in the palm of his hand before loading his pipe with it. 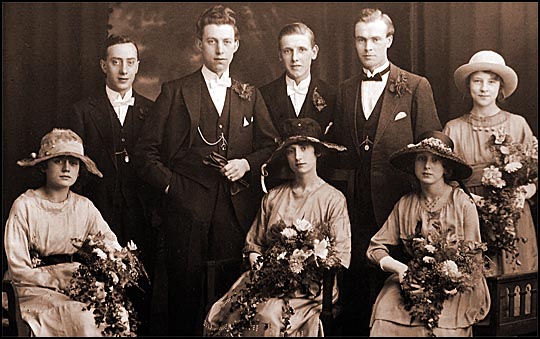 I've already showed a photograph of Johnnie and Annie's wedding in an earlier article so here is the wedding of Percy and Elsie Alston. Of all the people on the photograph, I only know John, standing on the far left next to Percy and Elsie and Annie on the front row. Elsie has a new hat for her wedding, Annie is wearing the hat that she got married in, a few weeks previously. The girl sitting on the far left of the front row appears to be wearing Elsie's hat from that previous wedding! I would hazard a guess that the younger girl standing on the right is Percy's sister, but there must have been some family fall out at some point and I know nothing about and certainly never met or heard about any of his family at all. 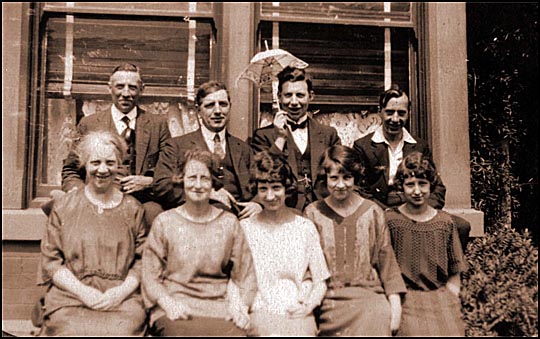 Four years later, it's 1925 and there is a family holiday to Blackpool. Again I don't know, but the couple on the far left back and front I take to be man and wife (as they appear together on other photos) and perhaps they are Percy's parents? Next to him, second left on the back is Great-Grandad Brierley - he of the mystery first name and I think the lady in front of him is Maggie - strangely, she looks so like her mother it is hard sometimes to tell them apart but given the date, Maggie would be 45 so I think this is her. Percy Parasol is next - I'm sorry - I mean Percy with a parasol! I did say he was jolly... Johnnie brings the back row to a close. Making up the centre and right of the front row are Elsie in the middle and Annie on the far right flanking a young lady who could be the 18-19 year old version of the 14-15 year old girl seen at Percy and Elsie's wedding above. 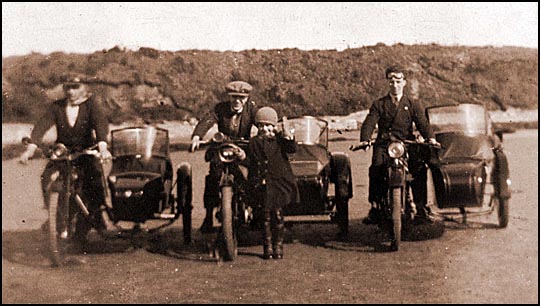 Middleton Sands, Morecambe in 1927. This must have been the same trip that we saw these three gentlemen on Morecambe beach earlier. Both Johnnie and Percy had motorcycle combinations - as a motorbike and sidecar was known in those days. I think they were members of a club in fact. At one time my Grandad had had the much coveted Ariel Square Four, but it backfired once when he was kicking it over. The whiplash of the kick pedal broke his ankle and he sold it straight afterwards without riding it again. Johnnie is in the centre, Percy - somewhat blurred - on the left. 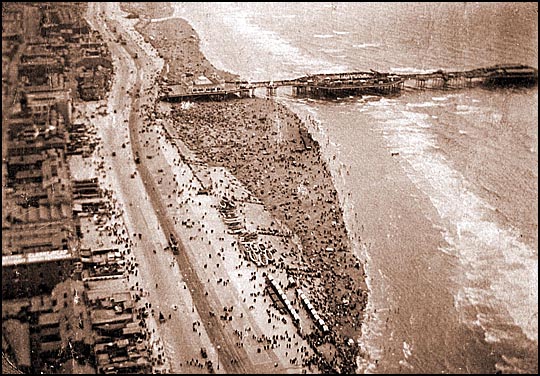 There are not many purely scenic photographs in the album, but I'll finish with this one. It was taken from the top of Blackpool Tower in 1920 and shows a Promenade Road virtually empty of cars. Even on the expanded version that I can look at I can identify few cars for definite. There is just one car or van behind a horse-drawn landau about to disappear off the bottom edge but all other larger vehicles could be cars or landaus. I remember when there were a few boats that used to take half-hour sea trips but there are at least 16 on the Promenade in this photo! Apart from the novelty of being on the water, a boat trip at Blackpool doesn't compare to most other places. There are no rocks, no headlands to go round - just a straight coast so that the bit between sky and sea got thinner and thinner for quarter of an hour and then thicker as you came back again... The other novelty to see, almost 100 years after this photograph was taken are the two rows of bathing machines lined up below the boats with a number already by the water's edge near the pier.