First Sketches from Outside the UK

Over a couple of entries I've shown the first sketches I did in the 1990s. These were all of locations in the UK, but by the end of the 90s we had started to venture out into other parts of Europe and the pad and pencil came out occasionally in foreign climes. 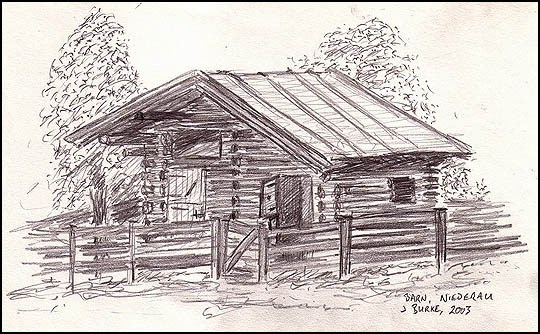 The first one was of a barn in Niederau in Austria. We were on a coach holiday and there wasn't a great deal of time for sketching, but one night I walked up the road from the hotel and found this log-built barn. It was the home of - of all things - a llama! A couple walked by and started to chat to me, but my German is just a touch rudimentary I'm afraid and pretty soon I had to admit I couldn't understand them. They didn't speak English either so after attempts at sign language, semaphore and mime, we grinned and parted company. 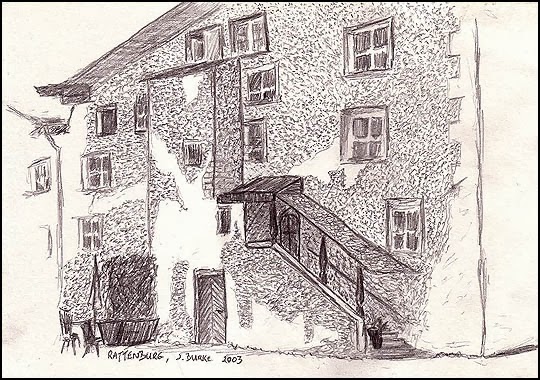 A couple of days later we were in Rattenburg and had a free hour or so. Fran and I had visited once before and knew of this back alley with the covered staircase and an inn next door. The couple that came to sneak a peek this day turned out to be Dutch and they spoke English well! 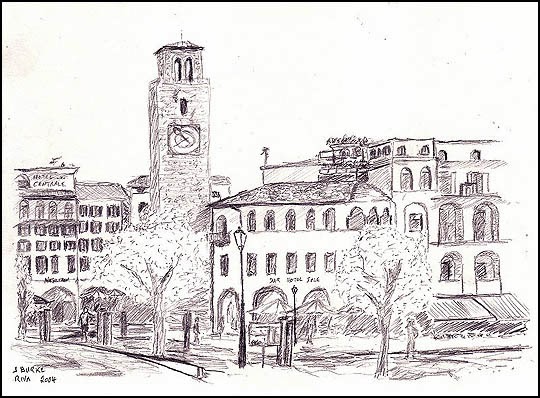 Another trip with the firm Leger, but this time we had flown out to northern Italy and were staying at Riva at the north of Lake Garda. I think of Riva anyway as the most picturesque of all the towns around the lake, though it's a close run thing. This shows the town from the lakeside mooring point for all the ferries.

We had a day trip to Venice during that week and this was drawn from the side of the lagoon near the gondola station by St Marks Square. I had quite a crowd around me at one point but not all of them sniggered so I was ok. 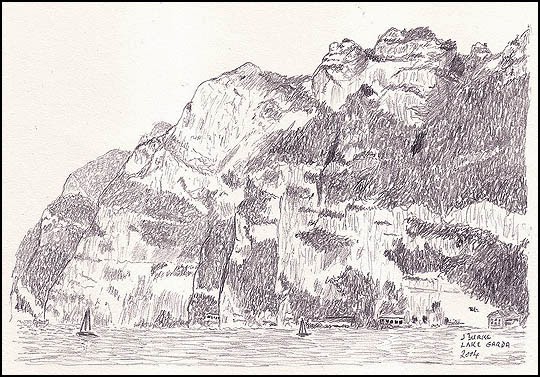 It was on this holiday that I solved my hang up about drawing rocks. This took ages, but on this particular day we had walked from Riva to Torbole and staggering back in the heat we sat on a bench and I drew this before we were compelled to find something to put out our smouldering clothes... Nice weather though... 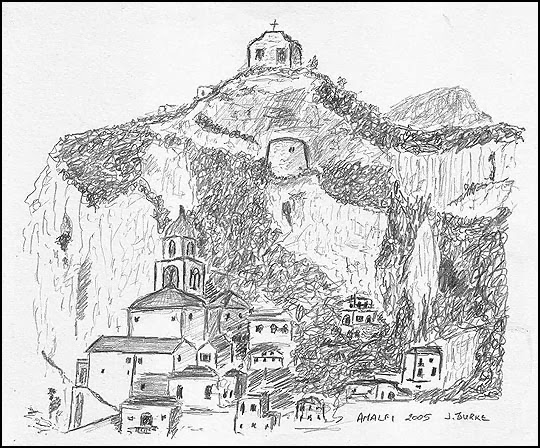 The year after we went to Sorrento and I did this one in Amalfi, standing by the quay, waiting for a boat that was to take us up and down the coast for a bit. I'm not sure that the rocks came out quite as well on this one, but this time I wasn't as worried about attempting them!

These were all drawn on an A5 sketch pad. For the next sketch entry I'll scan some of the slightly larger ones, that have never appeared online before. (Doesn't mean they'll be any better lol)

Return to Sketching and Artwork Index
Posted by John Burke at 13:42