Calvary - The Church of the Holy Sepulchre

Thursday 3 October 2013. In the previous entries I described our trip to Jerusalem as part of a tour from the cruise ship Thomson Celebration. The first entry about this tour covered the Mount of Olives and Garden of Gethsemane and the second covered our walk through the Stations of the Cross. 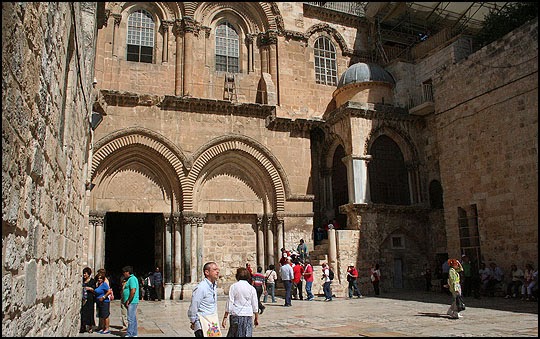 We have now arrived at the Church of the Holy Sepulchre, which covers the sites of both the Crucificion and the tomb of Jesus. The church itself was built by Constantine, the first Christian Roman emperor after excavating the site - the Emperor Hadrian in the second century AD had buried the site under earth and constructed a temple to Venus (some versions have it to Aphrodite) there.

In effect there are two connected churches here, one covering the site of the Crucifixion, excavated by Helena during which she reportedly discovered the cross of Jesus and the other covering the tomb of Jesus, the sepulchre itself. This was surrounded by a building called the Aedicule. It was damaged in riots and invasions, but remained a Christian building under the Muslim rule of the Persians. It was razed to the ground in 1009 by order of the caliph, provoking strong condemnation from Europe and, it is thought, partly providing the reasons for the Crusades.

It was rebuilt over the centuries, starting as a collection of open air chapels, roofed over in 1149. In 1555 the Aedicule was rebuilt and extended to create an antechamber.

Today the Church of the Holy Sepulchre is under the auspices of Catholic, Greek Orthodox and Armenian Apostolic Christians. In 1853 a status quo was agreed meaning that everything covered by the "common ground" should be left as it was at the time unless all three factions agreed. One effect is that a ladder under a window (see above photo) has been left there ever since.

On the right of the courtyard is Station Ten of the Cross, where Jesus was stripped of his clothes. 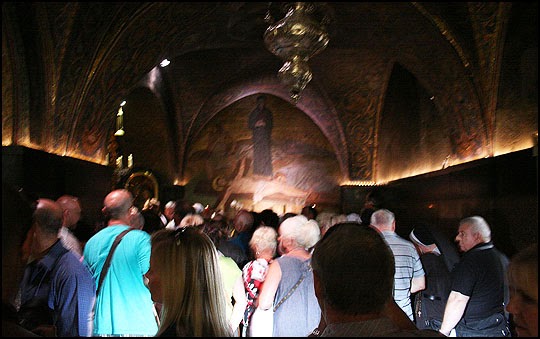 I don't like using flash inside churches if I can help it. I have a fairly steady hand, however in this case it was just a bit too dark. The flash would not have reached to the back anyway. This is Station Eleven. The spot where Jesus was nailed to the Cross. You can see that the place was filled with people - always a problem for me at only five feet and four inches... A mosaic at the rear shows Jesus being nailed to the Cross. 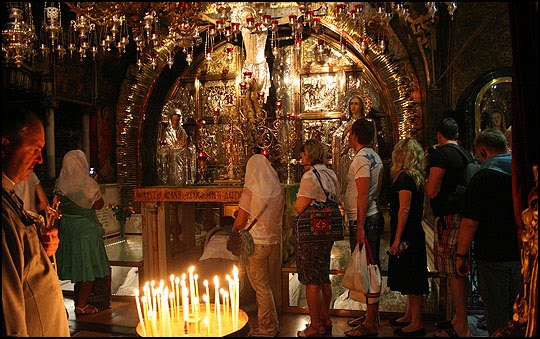 The site of the Crucifixion, Station Twelve. The altar is built over the spot and you see someone kneeling underneath to kiss the spot where the Cross stood. This has a silver star around it on the ground. To either side glass panels allow a view of Golgotha's rock with the split said to have been caused by an earthquake at the moment of the Saviour's death. 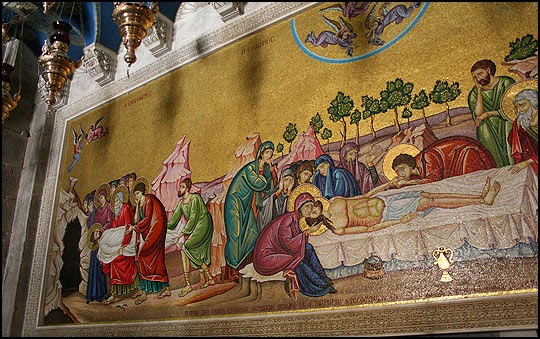 To the side of this spot is a large golden mosaic showing three scenes of the Crucifixion and its aftermath. We see two of the scenes here of Jesus' body being laid on a cloth over a slab of stone where his body was washed and anointed prior to burial and then to the left we see his body carried into the rock cut tomb. 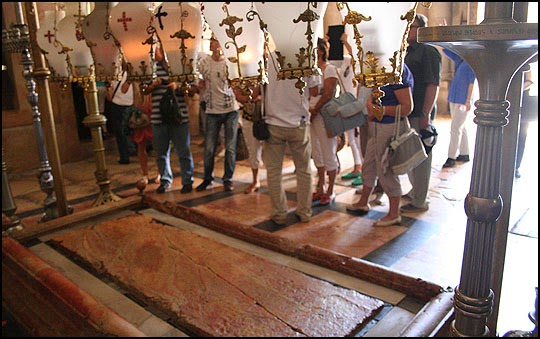 In front of the mosaic is the actual site of the Anointing Stone. The stone itself is a replacement of 1810, but the site is said to have healing powers and I took this photo in a gap of just a second or two before it was again surrounded by pilgrims, who press cloths to the stone in the hope that healing powers will impregnate them. This is the 13th Station of the Cross. 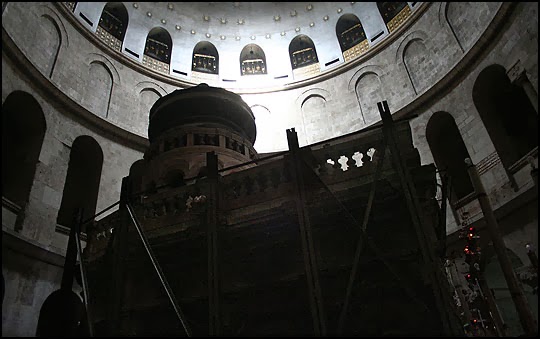 The Aedicule under the larger of the two domes of the Church of the Holy Sepulchre. This chapel-like building surrounds what was once the rock hewn tomb that Jesus' body was laid to rest in. The original ground was thought to rise at a steep angle from right to left. The antechamber that was created in 1555 covered the place where the Angel appeared to Mary and also the "Angel Stone", the stone that was thought to have blocked the entrance.

The Aedicule is in dire need of restoration. A process that is apparently held up by the Status Quo as agreement on a plan has not yet been reached. A skeleton of metal holds together the peeling red marble from around its walls. The Church of the Holy Sepulchre is huge, packed with people and you can't hope to see everything. We had no time to join the queue to go inside the Aedicule and I did not know about the the chapels all around it, 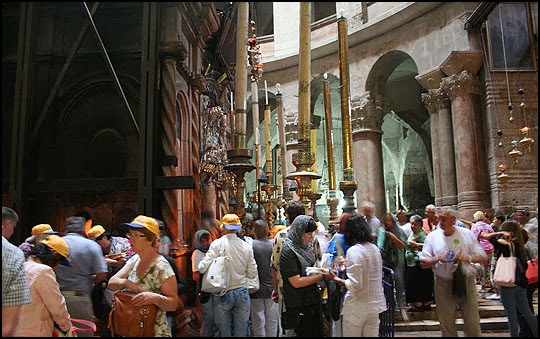 To the rear of the Rotunda containing the Aedicule is a further rock-cut chamber thought to be the tomb of Joseph of Arimathea. There are also chapels dedicated to the meetings of Jesus with Mary Magdalene and the Virgin Mary following the Resurrection amongst many others.

I tend to do things in reverse. I go somewhere and then read up on it afterwards... Perhaps I should do it the other way around. 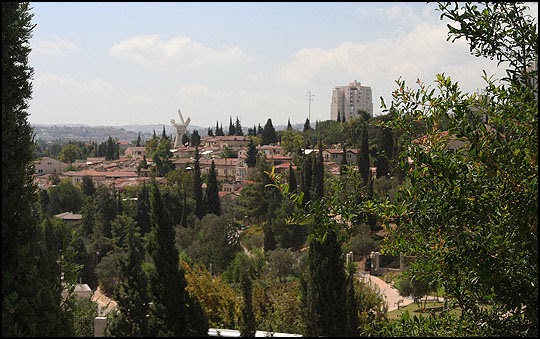 It is still just about morning. We leave the Church of the Holy Sepulchre, pressing against the incoming tide of newly arrived eager pilgrims and sightseers in order to get out. We walk a short distance and leave the city by way of the Jaffa Gate. We walked along the hillside and then down some steps, admiring the windmill in the distance and then boarded our coach, which will now take us into Palestine controlled territory, to Bethlehem. But first a spot of lunch methinks!