A Day in Rhodes

On 30 September we flew (on a brand new 787 no less!) to Marmaris, Turkey, to join the Thomson Celebration for a week on a cruise that had been re-jigged to avoid a planned two days in Egypt. I hope things soon settle down there.

Our cruise was now retitled Aegean and The Holy Land and we would visit Rhodes, Ashdod in Isreal, travelling to Jerusalem and then onto Bethlehem, Larnaca in Cyprus and Alanya in Turkey before returning to Marmaris at the end of the week. Or the beginning of this current week as I write... 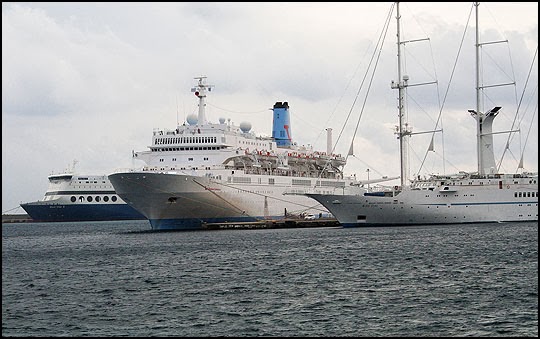 It wasn't a particularly blazing hot day as we arrived in Rhodes and we had been warned that there could be rain during the afternoon. They were right as it turned out, but let's not jump too far ahead, we have a morning's exploration to do first. We have been to Rhodes twice before, both times being in 2010.

On both those occasions we walked off the ship and through the nearest gate into the old city, spending our time in the medieval city itself. Whilst this is undeniably an excellent way to spend a day, this time I wanted to do something a little different and we walked around the city walls on the outside, heading for a look at what would be our fourth site of one of the Seven Wonders of the Ancient World, the Colossus of Rhodes. You'll have to wait until at least the next entry to see it because: 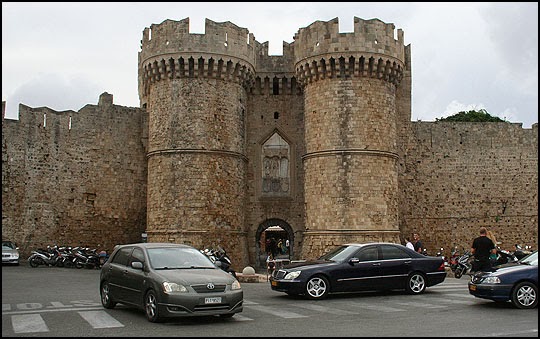 This is the Marine Gate, the main entrance to the town from the harbour. It has twin towers, the northern one (to the right) having been restored in modern times following bomb damage in World War II. The three figures over the gate represent the Virgin Mary and Saints John and Peter.

Traffic was relentless. I waited for a bit, but finally had to admit to myself that there would not be a chance to take a photo without cars partly obscuring the gate. It was built in 1478 by the Knights Hospitallers who had taken over the city, building on the existing Byzantium walls in order to strengthen the city against possible (and eventual) attacks by the Ottomans. Turkey can be seen from the city, it is only around 18 miles away. 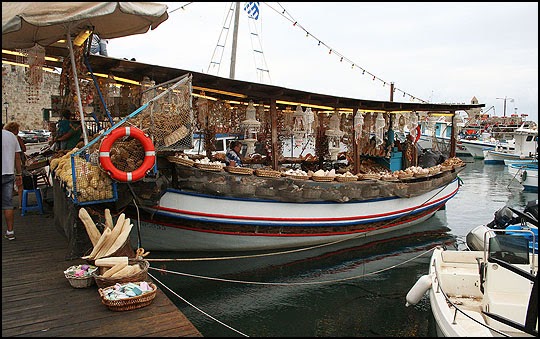 The harbour contains a number of ships kitted out as market stalls selling souvenirs and marine goods like this one. Sponges were six euros each, loofahs a mere five euros and, dear reader, you can scratch your back more easily with a loofah than a sponge! I think maybe the stall holders were missing a trick... True enough though, they had many more sponges than loofahs, so maybe they were just out to clean up... Loofahs are the fibre of a cucumber-like fruit, they don't grow in the sea like sponges. There's a wealth of unbelievably naive articles about them on t'Internet - including articles on how to use them(???) Obviously written by Americans and yes I did mean to add the "s" on the end. No less than 12 people had had a go at editing the article I saw. The Americans must either need - or believe that others need their - careful instruction on how to clean themselves. You start with a circular motion on the decolletage according to the article. Handily, this area is described so that users can find it without having to ask others to point it out. There's also loofah-use instructional videos on YouTube for those who find the article hard going... By heck, I put some research into these entries you know... 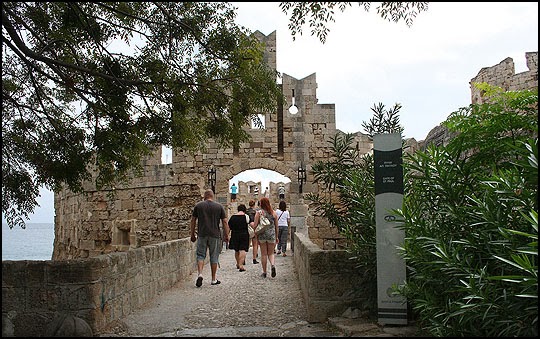 Another gate into the city, this is St Paul's Gate from the Mandraki Harbour. This harbour is the one where the Colossus of Rhodes stood, but no, you'll just have to let the suspense build up for a bit because we won't get that far just yet. St Paul visited Rhodes during his third missionary journey. In the next entry we'll see the little fortress corner that the Gate gives access to and look at some of the stone cannonballs still lying on the ground outside that tried to knock it down. We'll be moving closer to the site of the Colossus of Rhodes. Whether we get there or not depends on me resisting being led along ridiculous tangents like loofahs and stuff... Come to think of it, I didn't say nearly enough about sponges in this article...

Just to clear up any final doubts you may have about loofahs, the instructional article mentioned that you should tap them dry with a towel to remove excess water before hanging them up to dry. For readers in the UK and elsewhere I suggest rinsing them in the soup left after your bath and tossing them on the bath rack will suffice. Loofahs that get too stinky should be discarded as soon as you can visit Rhodes to buy another... Other skin cleansing products are available.