I've been out and about on my travels this week. Yesterday I started with a trip over to Leeds where I ran an online conference session with the help of the wonderful Kathy Boyer of JISC Regional Support Centre for the Yorkshire and Humber region.

Then a somewhat fractured train journey down to Bedford with one out of three trains cancelled, but an alternative only eight minutes later. Enough to miss my connection though!

Then this morning a taxi ride through the beautiful countryside between Bedford and Biggleswade to get me to the Shuttleworth campus of Bedford College where I spent the day as part of the steering group of a large project led by Bedford College involving partners from colleges all over the UK. 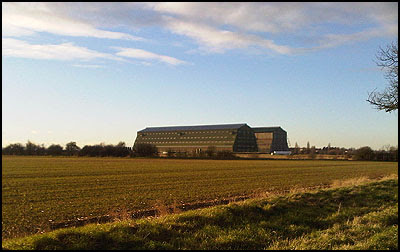 From the taxi I caught sight of a couple of strange buildings. At first I took them for aircraft hangars, but as we got closer I realised that these were of huge size. Fully five storeys tall.

All was revealed as we passed them later in the day as Bedford's Roy Currie very kindly drove me back to the station at Bedford.

"In a moment we'll be passing the famous Cardington Hangars," he said as a familiar shape appeared over the fields before us. 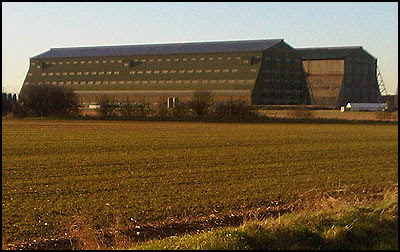 But Roy was able to tell me what the taxi driver hadn't! These were Britain's airship base. Built during World War One, No.1 Shed (to the rear) was 700 feet long and the R-31 and R-32 airships were built there in answer to the German Zeppelins.

Between 1924 and 1926 the hangar was extended by another 120 feet with 35 feet extra height prior to the building of the R-101 airship. At the time it was the world's largest airship until the Hindenburg came along. Sadly both airships suffered the same ultimate fate.

The R-101 crashed on its maiden voyage in France on October 4th, 1930 with a loss of life greater than the Hindenburg disaster that was to follow. It was the end of the British airship industry.

The two hangars (No.2 shed had been built elsewhere and then moved here later) were used to build barrage balloons during World War Two and ceased to be an RAF site in the late 1940s.

Return to Curiosities: Buildings and Infrastructure Index Page
Posted by John Burke at 22:15