In August 1983 I found myself pushing through the undergrowth of a forest near a village called Beetham in north Lancashire. The path - or perhaps I should say the line of least resistance - led to the top of an outcrop of rock. There were three ways down. 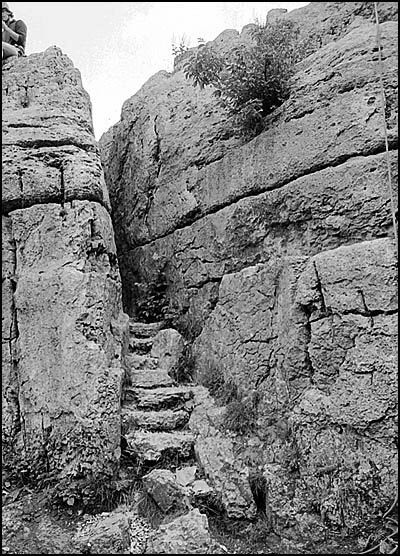 One was by rope, ably being demonstrated by a group of youngsters, one of whom can just be seen top left. The second was by jumping and hoping you didn't break anything on landing... The third was by the extremely narrow way of a series of what seem to be natural steps leading down through a fissure in the rock.

Legend has it that the flight of steps was made by the fairy folk, who further will grant a wish to anyone who climbs the stairs successfully without touching the sides. Even in 1983 when I was built somewhat in the manner of a racing snake, this would have been a severe challenge. I somehow feel even trying it today might be somewhat more embarrassing... er... I think I've caught a button on a bit of rock...?

Return to Legends, Lore and Superstition Index Page
Posted by John Burke at 19:22