A Morning in the Science Museum

14 January 2012. We were in London with friends David and Jeannie and it had been decided that the ladies would go shopping, whilst David and I would have a culturally stimulating morning.

The ladies vetoed Soho however, so we got on a bus and headed for the Science Museum. We waved to them from the top deck of our bus as we went past them at Oxford Circus! 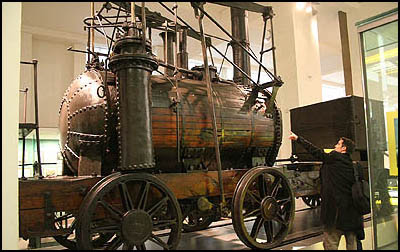 Here are just a few of the many wonderful exhibits we saw, starting with the steam locomotive Puffing Billy which was built in 1814 and pulled carts of coal from Wylam Colliery to the docks on the River Tyne. 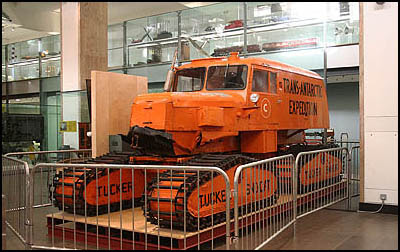 A Tucker Sno-Cat used during the 1955-58 Trans-Antarctic Expedition led by explorer Dr (later Sir) Vivian Fuchs. A label carried a quote from one of the team describing how it felt to be inside it as the nose reared up and then it slid back into a hole in the ice. Not for stay-at-home types! Judging from the barriers around it, the museum half expect it to fall over again... 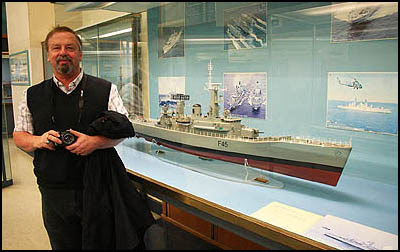 David was chuffed to find a model of the class of ship he served on whilst in the Royal Navy as a young man. I had helpfully shown him a model of HMS Victory but he maintains it was a later ship he was on... I've heard some of his naval stories and, believe me, they would sit well with the days of sailing ships and cutlasses! 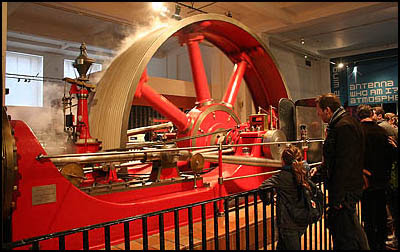 We were due to meet the ladies for lunch so we didn't have enough time to do the museum full justice. However, as we retraced our steps back towards the entrance, the massive mill engine was working, with puffs of steam shooting out here and there and looking suitably impressive.

It did away with the need for the treadmill, which must have been a relief to all those who previously had spent their long working day doing the equivalent of climbing a ladder.