What a cheat - I'm doing what I used to do aren't I? Talking about things I used to have or have now, things I've seen and places I've been to!

Anyway No.1 in a series of 100 seen things. Roundabouts may seem a strange subject, but I've been in Letchworth this week and came across this particular example... 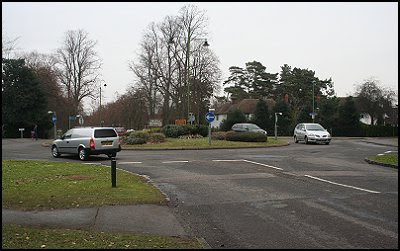 It's Britain's first ever roundabout. It was built somewhere around 1909 and I suspect the amount of daily traffic has increased a little since then.

It is almost surrounded by signposts proudly showing its status as the first roundabout and a little further away one supposes is a heap of rusting wreckage that are the cars that collided whilst their drivers read the message... 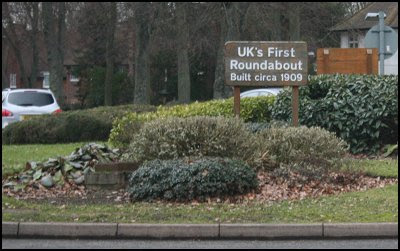 It wasn't the first roundabout in the world however. That was built in 1905 or thereabouts somewhere in America. Roundabouts have however become much more of a familiar sight in the UK than they are across the pond where apparently the gameplay is to aim your vehicle at one already going round...

I made that up of course - but there is one roundabout that is so notorious for accidents that no insurance company will pay out for accidents that occur around it. It is in that land of the considerate - France. It holds in its centre one of Paris's great monuments and landmarks: the Arc de Triomphe. 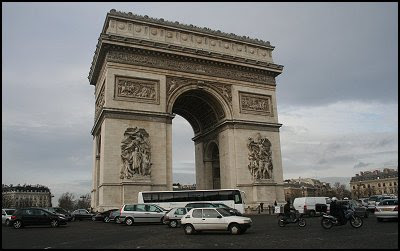 Anyone who has ever walked around Paris will know that the local habit is to walk in as straight a line as possible and to push out of the way without apology or acknowledgement anyone who happens to be in their way. Fran and Gill were standing quite still in the Parisian Marks and Spencer on one visit and a French woman walked slap into them and recoiled with a very indignant "Ooh la la!" as though they should have seen her coming and got out of the way.

Drivers approach the roundabout in the same way.

It doesn't help that drivers must give way to traffic entering the roundabout rather than those entering giving way to those already on it. That means that if you drive at full speed right towards the middle of the roundabout, it is up to everyone else to avoid you!

It also doesn't help that it is wide enough for about 6 lanes of traffic - should they ever try to drive in lanes behind one another.

It also doesn't help that there are no less than 12 roads joined to the roundabout...

Needless to say, it lives up to its reputation as an accident waiting to happen. In fact you don't even have to wait all that long...

Roundabouts in the UK have become an everyday part of life. There are now tiny versions which are a painted spot in the centre of a junction - perhaps best thought of as an overbout... There are massive versions where gameplan seems to be to accelerate to such speeds that no one else no matter which approach road they are on dare venture out. There are new towns here where roundabouts are so common they are thought to spontaneously appear like dandelion weeds...

And they are celebrated on almost every episode of Traffic Cops and Police Stop!
Posted by John Burke at 18:07