Birds in the Snow

I can't remember a winter where we had so much snow in Blackpool on so many different occasions before since we moved here in the mid 1970s. We woke up to another 1-inch covering of snow this morning. So it was no surprise to see the pheasant wandering around the garden looking for bread. 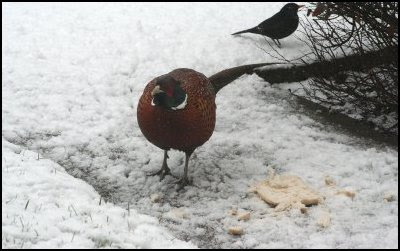 He only seems to come when it has snowed and has only ever once brought his partner along to share in the goodies. What a feathered meanie! In fact since Fran started putting bread out regularly we now seem to get a good range of birds in the garden every morning. 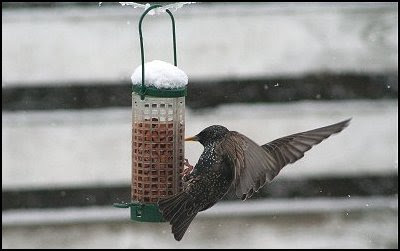 Thrushes and blackbirds are the most numerous, but we get starlings, and this year the sparrows are back in decent numbers after several years during which they all but disappeared altogether. We get magpies, including one poor soul who has lost his mate. They mate for life and she must have met with an accident as for a few years he has been on his own.

Yesterday I noticed two male robins in the garden at the same time - not something you see a lot as they are fiercely territorial. One stayed well away from the pile of breadcrumbs until the other had flown off with a piece of bread in his beak! 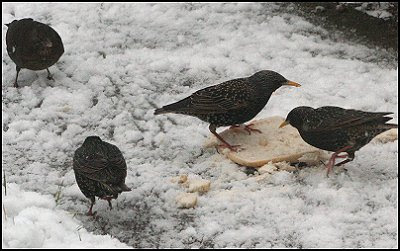 We have a container of nuts swinging on the washing line too and that attracts bluetits as well as some of the other birds.

We haven't had anything larger than the pheasant to date. The pond was dug out and grassed over last year. It had been a while since we had had fish in it - they acted like bread to the herons that used to drop in despite our best efforts. And since the opportunity to swim has gone also the ducks have given over doing belly-flop landings in the garden!
Posted by John Burke at 10:43