At last! I managed to get my hands on one of the new Mondeos from Ford this week. First time I've managed to drive a James Bond car - Daniel Craig drives one near the beginning of Casino Royale! 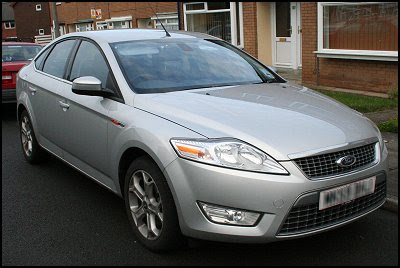 So how did I find the MkIV? I was quite taken with it actually, although I did have a couple of niggles. For one, it felt cramped inside! Now that, I think, is only due to the fact that it had bucket seats whereas mine has fairly flat seats and the new ones, shaped more are wider. What it means is that if you want to adjust the driving seat to move it up and down (electronic) or to adjust how reclined it is (a manual knob) you can only do that by opening the door because there just isn't room to shove your hand down between the seat and side of the car to get at the controls.

But the model I had was full of features. The media player was a multi-CD player which took mp3 CDs. This meant I could have taken enough music to have driven right round the country without having to change a CD. The onboard computer has an easy to navigate screen between the speedometer and rev counter that allowed me to use controls on the steering wheel to select any track from any folder from any CD - or do the sensible thing and just start at track 1 on CD 1 and let it do its own thing! 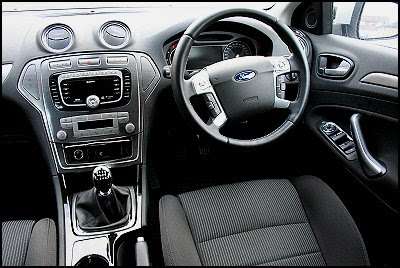 The power outlet is set to the left hand side under the stereo unit and caused no problems with gear shifting and trapped fingers - definitely a point scored over Vauxhall's Insignia! The gear lever has a nice solid chunky feel to it and reverse now has a lift-ring before swinging the stick to the left and forward. The 6-speed box coupled with the 2 litre diesel engine was smooth and reliable, though an experimental quick start made me purse my lips at the delay before the engine started to rev - had I been trying to nip out into fast traffic I'd have been frightened at the lack of movement for a couple of seconds!

But I don't drive hard and fast much these days and definitely not at the beginning of December! As I drove out of Blackpool almost every lay-by had a small group of hopeful traffic cops, none of whom were in the slightest embarrassed at my stolen VCR never having been found and returned after all these years...

So once on the motorway I whipped it up to 70 and engaged the cruise control. As the speedo reached 70, my SatNav showed 67-68 which is not so bad. My own car shows 67 on the SatNav at 70 on the speedo and the VW Golf I had last week showed only a measley 64 mph!!! That's why so many people are driving about at 25 these days!

At 70 (or 68 depending on which you believe) the Mondeo is so smooth you think "Surely I'm only tootling along?" The clock goes all the way up to 160 and at 70 you believe the car would do it without any problem. Certainly the once or twice I dipped the pedal to go past someone doing a mile-an-hour less than me had the car leaping forward rewardingly. I nipped past them and let it slow back down to the cruise control - a very nice car to drive!

The cockpit had independant left and right temperature control. I set them in tandem and it kept me happily at a constant comfortable temperature whilst outside the temperature dipped and rose with the weather. 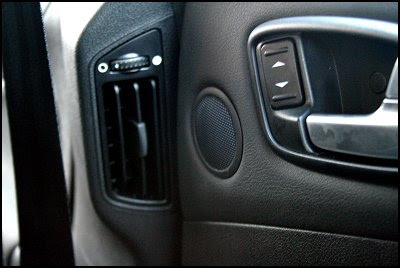 Had I had any passengers in the back seat, they even had face-level ventilation from the side strut between the front and rear doors.

I drove from Blackpool to Taunton on Tuesday, from Taunton to Brighton on Wednesday, from Brighton to Oxford last night and then back to Blackpool today. After starting with a full tank I just put in a coupe of gallons at Warwick services on the way back then filled up when I got home. I'd used 76.44 litres to do the entire trip of 720 miles and I make that almost 43 miles per gallon which isn't bad at all! Bear in mind I've driven on cruise control at 70 (or 68!) most of the time so I haven't been taxing the engine at all!

The petrol cap was a surprise - Ford have gone for a simple push from the outside and it will spring open. There is no unscrew cap inside, it has the new style spring-loaded flap that you push open with the nozzle from the pump. I presume that the petrol cap locks as you lock the car to avoid tampering. Locking was another of my niggles - the buttons on the key are not the small circular buttons that I have on my MkIII. They cover the entire width of the key and as you grip the key to pull it from the ignition - you lock the car. I did it every single time I took the key from the ignition. The first time I set the alarm off by opening the door. After that I learned to unlock the car after taking out the key! The actual key is a flat blade too, unlike my circular shaft with a broader end. The ignition slot can't be seen at night - no light shines on it and it was fiddly putting the key into the slot. I never thought there was anything wrong with keys dangling from the dashboard myself...

Other snippets? Locking the car swivels the wing mirrors inwards automatically which is a nice touch and this morning I got in a deep frozen car with thick ice on all windows - the heated windscreen and rear screen were clear in a short time and all side windows not long after.

The hire guys just came round to collect it. As I opened the door they started singing Christmas carols. I told them to bog off... I want to keep it...!
Posted by John Burke at 18:29