It's not only the blog that's been a bit neglected of late, it's the Flickr account as well!

Although there have been a few updates there even if you haven't noticed. This is because I am now re-scanning photos in widescreen format that had previously been uploaded in 800x600 format. 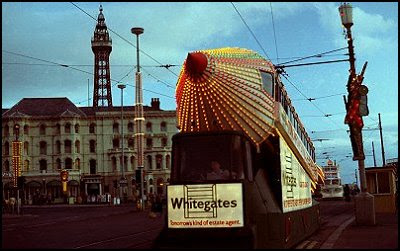 Have a peek in the Blackpool Trams set for instance and you'll see not only scans in new sizes, but I've managed to get the colour balance a bit better too! Some of these old negatives are horrendously mucky though, with hundreds of bits of dust stuck fast against the emulsion of the film. It takes ages cleaning them up and I have a limit of half an hour before I just think "Sod it..." and save the file as it is! 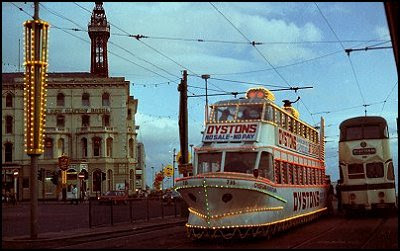 But that's not normally so bad! These two photos were taken early one evening in September 1985 as the illuminated trams came up the the North Pier pickup point for the Illuminations Tour.

Anyway I suspect scanning may be suspended for a couple of days! Miss Franny and I now have a very rare few days at home together! After all my chasing about, this week I've been working at home whilst Fran has been doing some grotty shifts. She had a 5:30am start, a midnight finish (thankfully not on the same day!) and both of my journeys to take her and pick her up saw me scraping snow off the car and coping with the festive skating rink that is our road. Last night as we got back around a quarter past midnight I thought I'd reverse into the lay-by at the end of the cul-de-sac but reversing and turning at the same time was out of the question. I could move sideways quite nicely but that would have ended a bit disastrously so in the end I gave up and parked outside the house again where the car had had two near misses during the morning.

A care worker had done a graceful and ballerina-like pirouette and parked abruptly rear onto the pavement just a few inches from my front bumper and some twit in a taxi sat for ages spinning his wheels like the clappers behind my car, turning the snow and ice into an extra slippery sheet whilst sliding uncontrollably sideways first one way and then the other. Being a professional driver obviously doesn't require you to necessarily have much of a brain...

It's thawing nicely now and hopefully by tomorrow morning even our grit-neglected road may be back to normal! But don't worry kids because Santa's sleigh always works because that clever old Santa has glued some snow to the bottom of the runners!!!

Merry Christmas and a Happy New Year to all my readers!
Posted by John Burke at 19:09