Negatives from this event came to the top of the scanning pile over the Christmas period so I thought I'd share a few with you here. 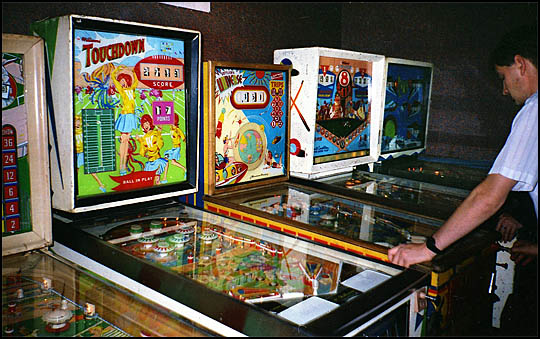 The convention took place in Salford over the 3rd - 4th October, having been moved from Brighton over venue problems. Players and collectors gathered from all over Europe to play on some 50 pinball machines representing the 1940s to one machine which had yet to appear the arcades. An added attraction was the staging at the convention of the 1992 World Pinball Championships. We entered the hall to be met with the sight of four rows of gleaming, flashing machines, all waiting to be played and all set to give free plays. We ignored them with some effort and went to the POA stand where we bought POA badges and some books. Then into the fray! 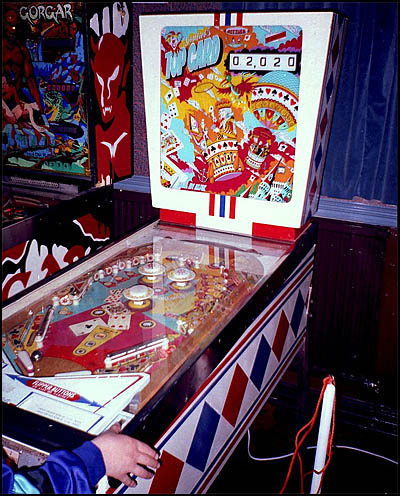 At the top of the hall was a stage on which was a line of four machines. A 1990 Williams Taxi was the machine for the adults Hi Score competition. Next to it was a 1964 Gigi from Gottlieb looking as though it was brand new, not a blemish on the paintwork of either playfield or backflash. This was the machine for the Under 16s Hi Score competition, but many adults just had to have a go! Two brand new machines - one of which had still to appear in arcades at the time - had a crowd around them for the duration of the convention but we left them pretty much alone; the other machines on display were all doomed never to be played in arcades again! 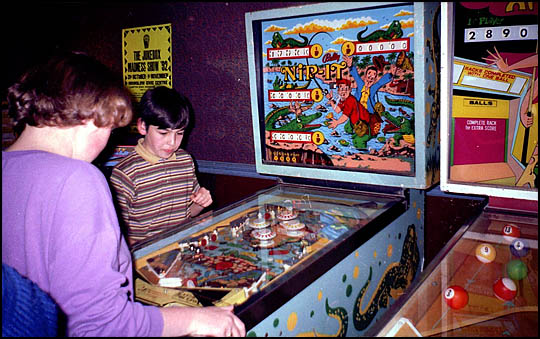 There were several Bally games of the late sixties and early seventies with zipper flippers, where the 2" flippers close together preventing the ball from draining out between them. A Bally game, Nip-It of 1973 had an extra button on the right hand side of the cabinet which caused a metal rod to appear from under a cover, grabbing the ball and pulling it under the cover, to appear down a side channel, heading for the right hand flipper. There was also a Cosmos of 1969 which had 9 tiny rollover studs in 3 banks of 3 across the bottom of the playfield. Securing the ball in the covered kickout saucer at the top of the playfield caused a tiny moon to revolve round the planet on the backflash. Both the above games included Bally's mushroom bumpers, flat-topped plastic heads on a rear thin stalk which lifted when the ball hit them, closing the switch to advance the score. 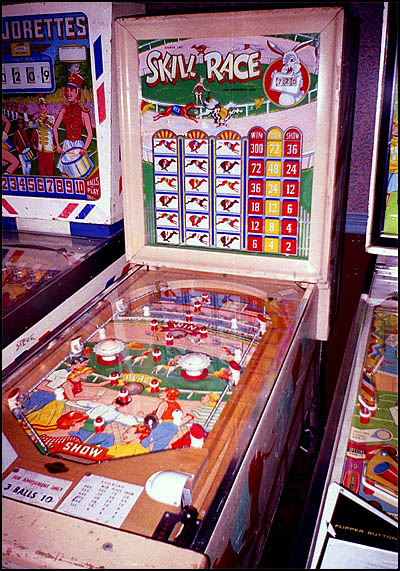 There were some machines old enough to have a second plunger arrangement which lifted each of the five balls into the main plunger channel. These were mainly add-a-balls and were on continuous scoring, not having a start button. In the arcades they started when the player inserted money and stopped when all the balls had been exhausted. To put them on free play meant just having the balls repeatedly lifted to the plunger channel. 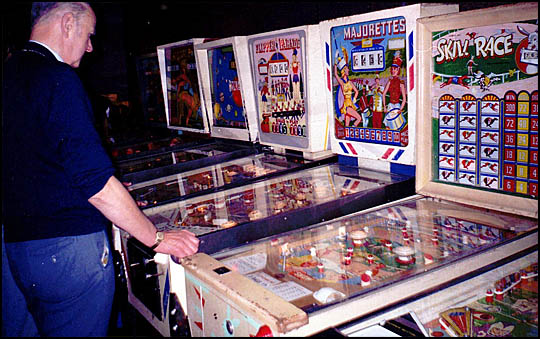 Fran and I entered into the World Championship, playing six games on a choice of 6 machines. You could choose whether to play all six or concentrate on a smaller number of machines to become familiar with it. By the end of the day we both had qualified to play in the quarter finals but then on the second day of the competition the unbelievable happened - we drew each other as opponents! One of us was bound to get into the semi-finals therefore and it was Fran who beat me by a narrow margin after taking it the heat to the maximum number of games. Sadly she was knocked out in the semis. It was the first of several conventions we went to and in 1995 I helped to organise the convention in a hotel in St Annes. 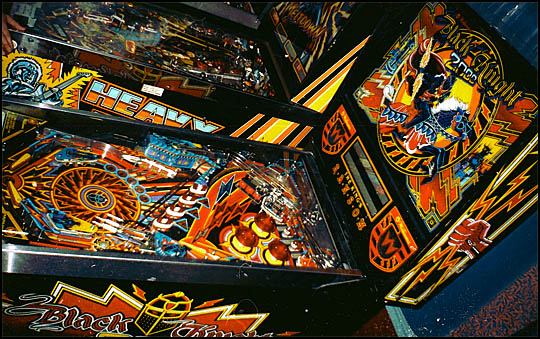