Sunday 8 December 2019. We arrive in Rudesheim and the coach parks a little way out of town. A road train has been booked for us to ride all the way in. 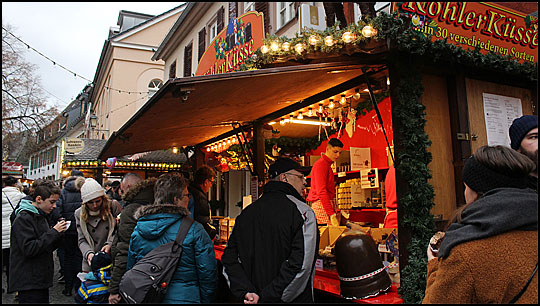 The train drops us off behind the river front and right at the start of a string of Christmas Market stalls. 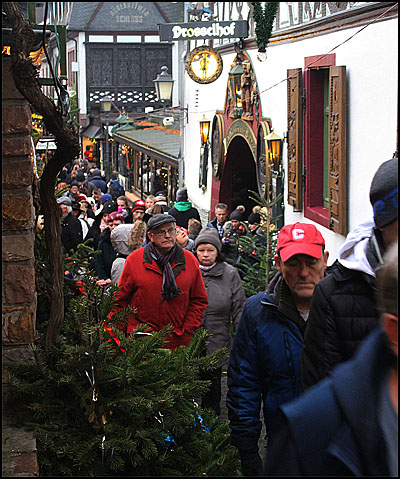 There is also a mechanical music museum, though when we try to get in, we are turned away with the phrase "We are completely booked for the rest of the day" even though half an hour earlier Les, our driver, had phoned to ask if they could take a party of ten or more... Unfortunately, we were the only ones who thought it would be a good thing to visit. 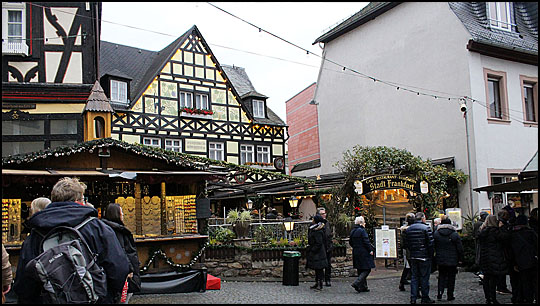 There are some rather inviting hostelries too - although the painted cat on the front of the Stadt Frankfurt looks more suited to Halloween than Christmas! 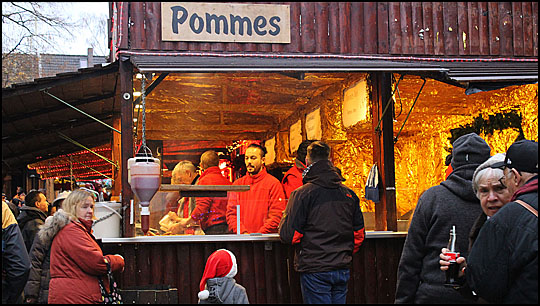 Unable to visit the museum, we console ourselves with a somewhat massive cone of chips... The Germans spell pommes frites exactly the same way the French do and having only learned French at school I once made the mistake of pronouncing them as "pom freet" in Bavaria. One diner laughed so hard he choked on his own chips and the waitress glared at us sternly and said "pommus frittus!" in an affronted tone. I got it right this time... 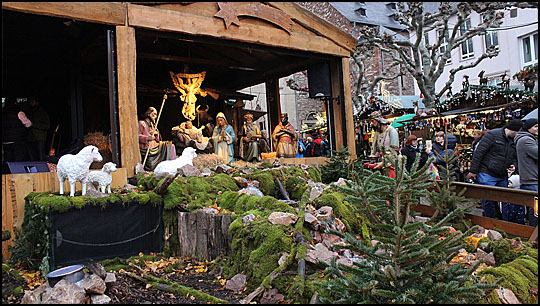 A large Nativity scene. It reminded me of a trip to Bethlehem six years ago where the Palestinian guide pointed out the hillside where the Shepherds had been and said "Lets all sing the song..." He was sadly disappointed. 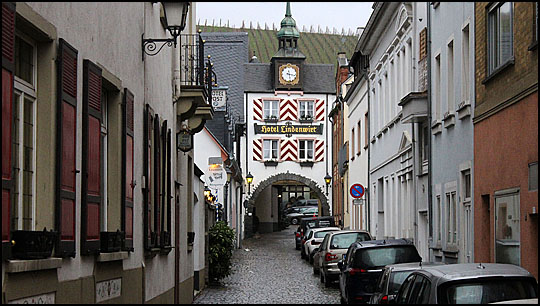 We had a good look round the market and found more stalls on the side streets as we walked back towards the river front. This however is an alley off a side street and doesn't have any... 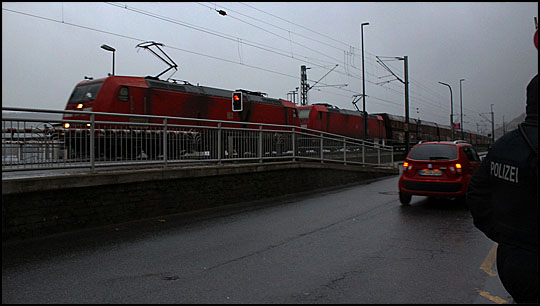 A goods train was passing as we came to the river front. We turned left to walk along another row of market stalls, getting split up a few times, there were so many people there. 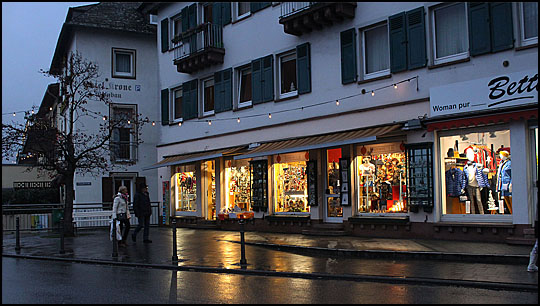 We also had a look in the souvenir shops. A bottle of wine was chosen to grace our Christmas table and one or two other bits and pieces were bought, including the inevitable fridge magnet. 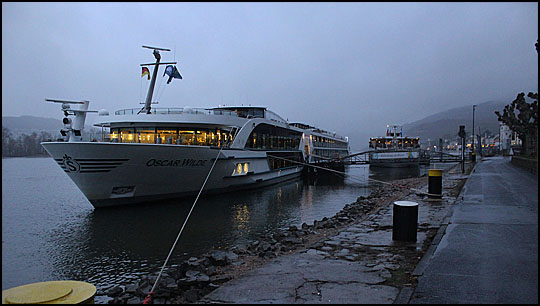 Then we crossed the road and level crossing to walk along the riverside back towards the coach. Much too far... We should have turned off the river bank after a short distance but were blindly following another couple who just kept going. There should have been a clue in the way they kept turning to see if we were still following them...

Eventually we reach a ruined bridge. It was dark now but I could make out a sign saying it was the Hindenburg Bridge. An arch still stands. The arch next to it had broken away from the support and leans drunkenly in large chunks of masonry against its neighbour. The spans over the river were destroyed by air raids in 1945 during World War II and the German Wermacht destroyed the arches in an attempt to hold up the Americans who were advancing through the region.

We caught up with the other couple who were panicking a little and then got some conflicting directions from people and I rang driver Ian. After some confusion we got back to the coach just about on time. Others needed Ian to go out searching for them. But we all got back on the coach safely in the end. We were not the only ones to walk as far as the bridge! 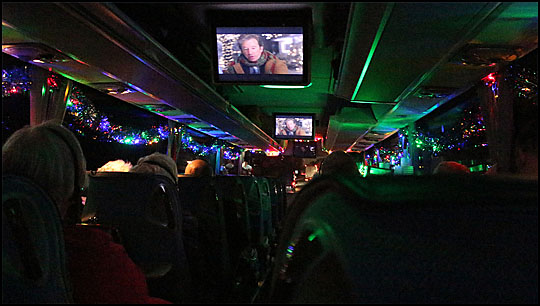 Monday, 9 December 2019. A very early start for our journey home. The hotel puts take-away breakfast bags together for us at 5:00am. Another pre-packed lunch is available at the coach interchange before we come back through the tunnel to England. We get a 25 minute stop on the motorway - just time to wolf down a MacDonalds burger - never my favourite meal. The coach looks amazing from the easy chairs at the back of the vehicle. For some reason we leave it at Blackburn for a taxi to Blackpool but our way into Blackburn is blocked by an accident and we have to reverse up a side street to turn and then detour around through Darwen. We get home on schedule though at 11:30pm.

Return to Magical Markets of the Rhine Valley Index Page
Posted by John Burke at 10:22