A Weekend at Brooklands, London and Hampton Court Palace

Friday, 23 March 2018. We had booked ourselves in at the Weir Hotel and Pub in Walton-on-Thames and were going to fulfil a long-nurtured desire to visit Hampton Court, once home to Henry VIII and a few following kings and queens of England. 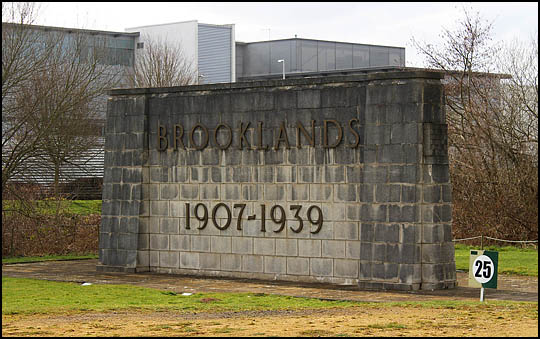 We motored down from Blackpool along the M6 wondering again why so many miles of motorway should be coned off and speed restricted for just a few yards of actual activity. By the time we got down onto the M25 and the land of drivers with evil glares, ever willing to open up a space to let you in then speeding into it themselves blaring their horns, we decided to visit Brooklands Race Track and Museum.

This was the first racing track in the world, constructed in 1907 and the site of many early speed records. It was also an early centre of aviation with aircraft factories and events centred there. The 1965 comedy film Those Magnificent Men In Their Flying Machines is centred around a race track "Brookfield" that looks remarkably like Brooklands. 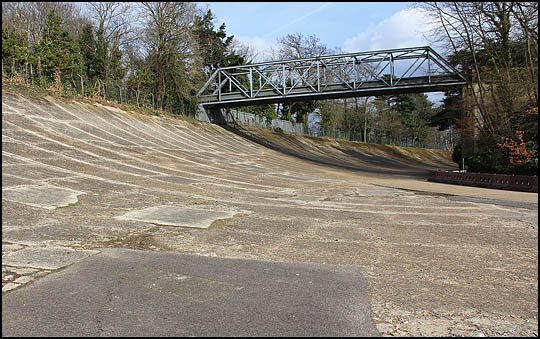 The track was steeply banked to allow the cars to achieve higher speeds on the curves. Only portions of the track still survive. 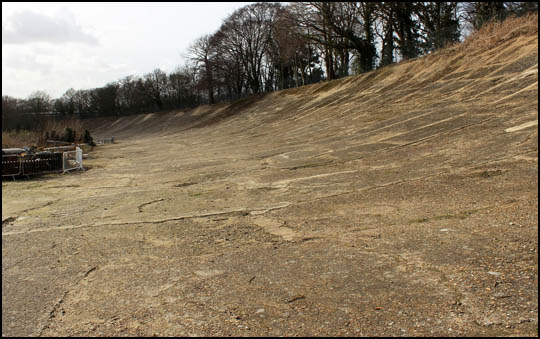 At this point the far edge of the track is 29 feet above the lower part. If you visit, do not be tempted to try to climb it. It is slippery and dangerous and a long way down, rolling and having your skin scraped off! I remained on the lower level with only a brief calculating glance wondering how far I'd get up even with a sprint. But then... I'm a bit past my sprinting years... About 50 years past them I think... 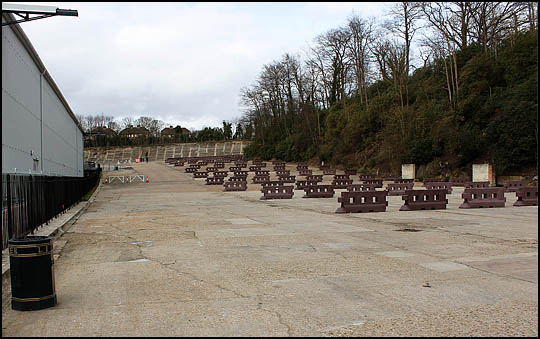 This was the finishing straight. The barriers were being placed that afternoon to cater for an event celebrating the Mini which would take place over the weekend with many hundreds of Minis being brought by clubs and individual owners. I had one myself in 1972. Great fun and much better to my mind than the ever expanding things that bear the Mini name these days. 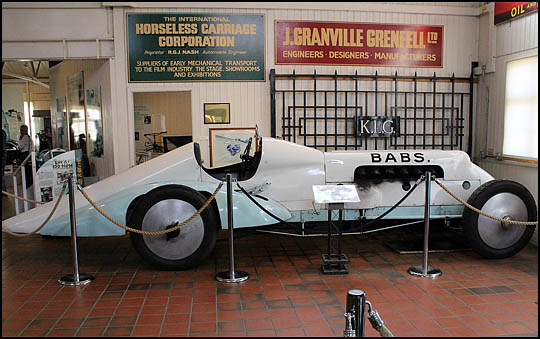 In fairness to the museum at Brooklands I am not showing lots of photos of the fabulous collection of cars and aeroplanes in the collection. Apart from this which was a great surprise and joy. Babs was the Land Speed Record car of John Godfrey Parry Thomas. On 27 April 1926 Parry Thomas set a new World Record, taking his car through the measured mile at Pendine Sands in South Wales at a speed of 169.3 miles per hour (averaged from a two-way trip through the mile). Knowing it wasn't high enough to last for long he returned the next day and achieved 171.02 mph. On 4 February 1927 Sir Malcolm Campbell raised the record to 174.88 mph.

Parry Thomas made another attempt on 3 March 1927 on the sands, but his car was trailing smoke. On his return run Babs slewed sideways, rolled and then carved a gouge out of the sand as it spun round to a halt. Spectators raced to the rescue but found a grisly scene. Warning! Skip now to the next paragraph if you are of a sensitive nature... Parry was still sitting in the driving seat but some part of the car, possibly the chain that drove the rear wheels from the engine and which had snapped at around 2000 revs, had taken off a part of his head, which was lying on the sand at the side of the car.

Parry Thomas was buried at Byfleet Church at Brooklands. The car was left on and eventually sank beneath Pendine Sands. In 1969 she was excavated by Welshman Owen Wyn Owen and painstakingly restored. Parry Thomas had bought her for £125 from Count Louis Zborowski, whose racing cars were all named Chitty Bang Bang. Sounds familiar? Babs had been Chitty Bang Bang 4. Powered by its rebuilt 27-litre Liberty aero engine, it is once again in racing condition. 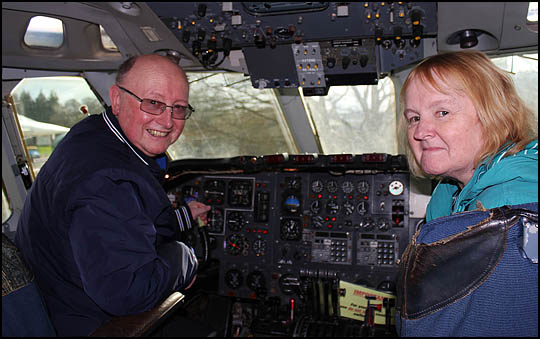 Similarly with the fabulous collection of aircraft, including the first British Concorde, VC10, Harrier Jump Jet, Wellington, Sopwith Camel, SE5a and Vickers Vimy and many more - this is the only photo I'm showing. This is the intrepid crew of His Majesty, The Sultan of Oman, Qaboos bin Said Al Said's Vickers VC10 which was designed and built at Brooklands and is fitted out in the most opulent and luxurious manner once behind the cockpit. Even the toilet is spacious enough to allow the Sultan's valet to be in attendance. 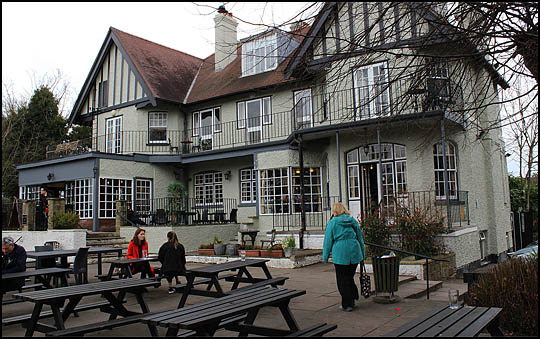 Time was marching on and we took our leave of Brooklands, having spent a fabulous hour and a half there. Even so we missed several exhibits including the entire building housing London buses. We'll wait for next time when three will come round together...

This is The Weir at Walton-on-Thames. Basically a pub but it was very comfortable, we were welcomed and looked after and the food was excellent. We had the room with the three windows in the gable above the open door on the right and had a lovely view over the river and use of the balcony. 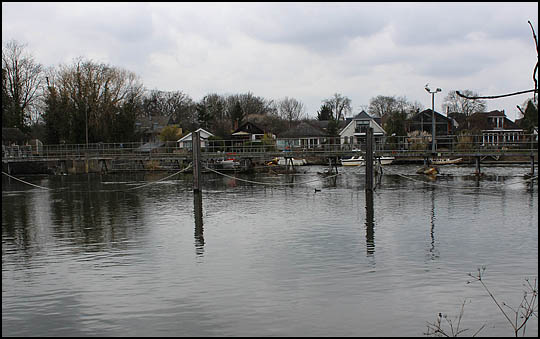 On the Saturday we caught a train from Walton station into Waterloo, London and walked our feet off, visiting Westminster Abbey and then walking up to and along the shops of Regent Street and Oxford Road before heading back to Waterloo. I have to say I found Westminster Abbey disappointing. You can no longer get into the Shrine of Edward the Confessor where many of our past kings are buried, but have to pay extra to do so in a small group. "It's a very delicate area and the jewels have all been stolen from the shrine," I was told when I asked the reason for the closure. They didn't mention that the jewels were stolen many hundreds of years ago and that they were simply taking more money off people who had already paid a not inconsiderable entry fee.

My other gripe is that so many of the tombs are not labelled, but have lengthy Latin inscriptions in a far from easy to read font and even with a vague smattering of latin I wasn't able to determine who was in most of them. Elizabeth I's tomb is obvious as is King Henry VII and his wife Elizabeth of York (the White Princess). But I'm not really sure if I identified Margaret Beaufort's monument correctly and couldn't find Anne Neville, the widow of King Richard III at all. I'm afraid I came out feeling rather cheated... 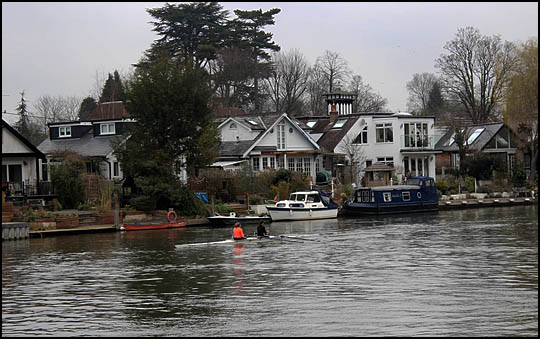 We had been told that it was a walk of about three miles to Hampton Court, from the hotel along the tow path of the Thames. I'd have thought nearer to four miles. I don't have long legs at my manly five foot five and on Sunday morning it took us about one hour and twenty minutes to walk there, not counting a short break for a morning coffee at East Moseley Cricket Club. 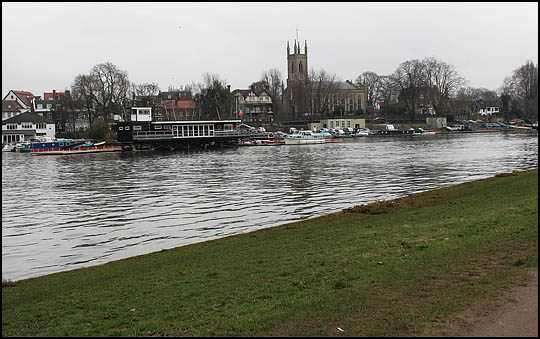 The weather kept dry, even if it wasn't promising anything and the views along the river were pleasant, but we were happy to come to a bridge across the river and see the Palace of Hampton Court beyond it. 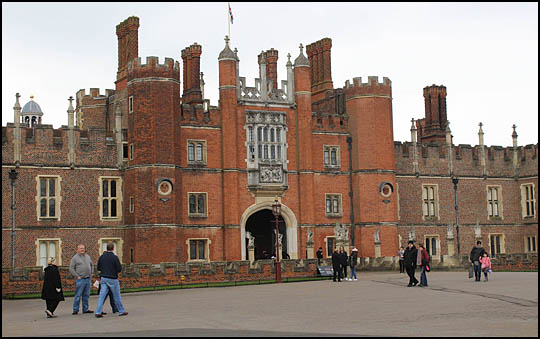 Once again I am not going to publish any photographs of the fabulous interiors. You are allowed to take photographs in most rooms apart from the Crown Room holding the replica of King Henry VIII's state crown and the Cumberland Gallery where some very famous and well-known paintings are hung. The Great Hall is huge and instantly recognisable from TV programmes such as The Tudors or Wolf Hall. There is the Haunted Gallery - part of Henry's processional route from his quarters to preside over his wider Court on Sundays and Holy Days. Along this corridor his fifth queen, Catherine Howard, about to be arrested for adultery in 1541, ran to find Henry and plead her innocence but was seized by guards almost within reach of his door and was dragged screaming back to her own rooms. It is said that her ghost haunts the gallery. But she must have been taking the day off... 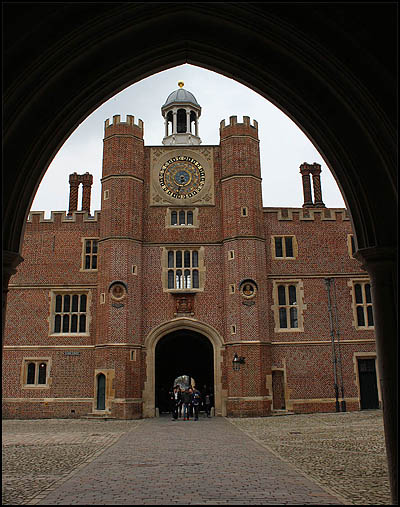 But it is an earlier queen, Queen Anne Boleyn, mother of Queen Elizabeth I, for whom much of the royal palace was furnished and built. Thomas Wolsey had created a spectacular palace here and in 1525 presented it to the king. Unable to secure the King a divorce from Catherine of Aragon, Henry chucked him out of the palace in 1529 and started building anew, spending vast sums of money to create chambers for his intended new bride. She was never to take up residence here. Looking across the Clock Courtyard, to Anne Boleyn's Gate, which was at least named after her. Perhaps not by Henry.... 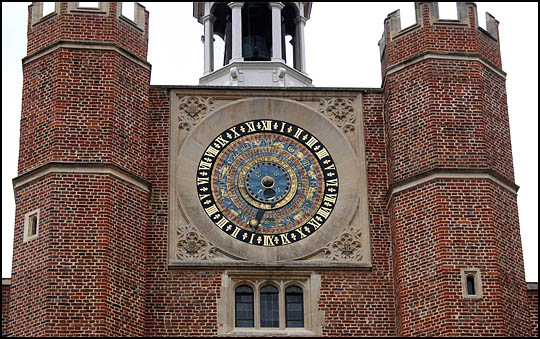 The astronomical clock with its single hand has a 24-hour dial around the edge, a rotating outer dial showing the day, date and current sign of the zodiac and an inner lunar dial rotating to show the phase of the moon. High and low tides are indicated - essential as the principle form of transport to London was by barge, as the rapids between the piers of London Bridge were very treacherous. 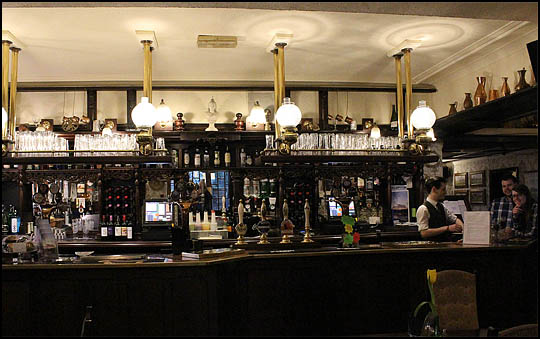 After the walk to the palace and then a few hours walking around it, we decided to ride back to the hotel and, walking down to the railway station, picked up a taxi without any problem. We got back a good deal quicker than we had taken to make the outward journey that morning!

It was now Sunday afternoon and the pub was very busy. We found a table and sat with a drink, or two, whiling away the afternoon before deciding it was time to eat. I took a couple of photos of the bar as it was starting to go dark. A company whose premises were opposite the rear of the pub found a car parked right across their entrance and phoned to see if it was someone at the pub. The staff made enquiries but no-one admitted to it and over the course of the next hour, much excitement was made of the arrival of the Police and eventually a tow truck... Someone was going to return to their car a sadder and hopefully less self-important person than they had been when they ignored the possibility of the entrance being in use! 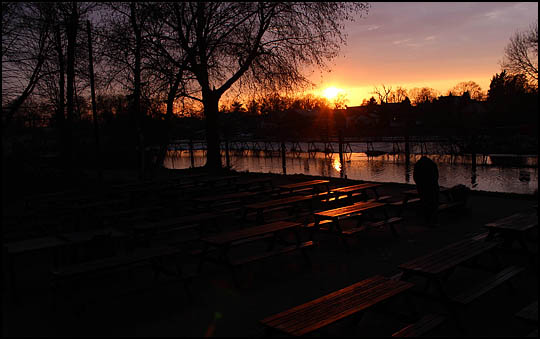 And then the sun went down in spectacular style across the river. Was it just those stories of Anne Boleyn and Catherine Howard, or was there really a headless ghost haunting the riverside? 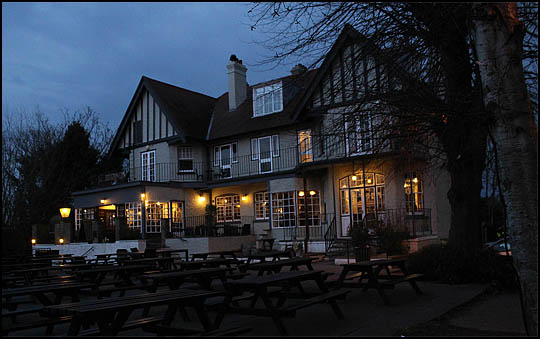 A final look at the Weir Hotel Walton-on-Thames. I would without hesitation recommend it.