Off The Usual Track in Venice

Monday, 16 October 2017. We are in Venice for the day and counting ourselves lucky that yesterday's fog did not prevent us from getting in this morning, which it had been threatening to do. We left the ship on our own and found the ticket office for the water bus to St Mark's Square. We bought return tickets for 15 euros each that allowed us to return within 30 days. Nice thought but we only had one day here!

The trip was with the Alilaguna company whose boats use a mooring point to the left of St Mark's Square as you view it from the water. Whilst we waited to board we fell into a conversation with a couple from Texas who were living in Germany and had arrived like us on a ship - the Aida Blue. 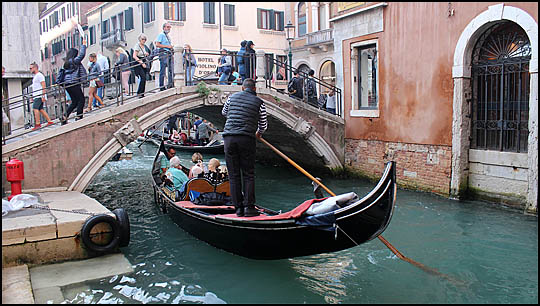 We have been to Venice a number of times and have tended to walk the same route between St Mark's Square and the Rialto Bridge. So today, having got off the water bus we turned away from St Mark's Square and without the aid of maps or prior knowledge headed into new territory! 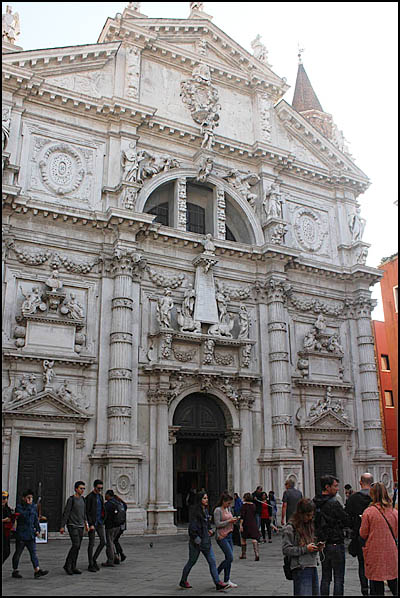 The sheer number of churches in Venice is staggering. Without the benefit of a map I haven't a clue which churches we saw, but none of them are plain or unadorned! 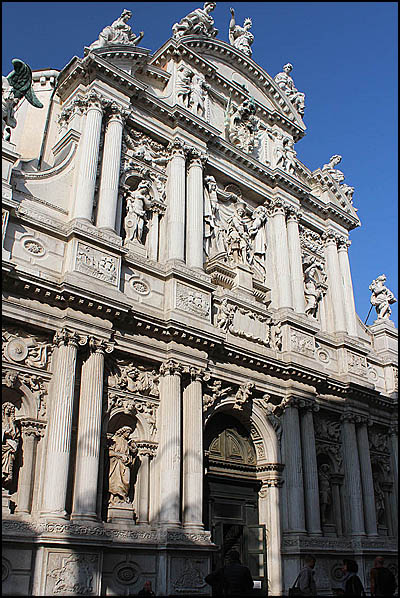 There had been a hint of mist about in the early morning but it soon burned off and the sky turned a deep blue. Whilst we truly had no idea just where we were, I knew that the Grand Canal was to our left and that it curved around us to the Rialto Bridge somewhere ahead and to the right of us, making it inevitable that we would either find the bridge or, more likely, come out onto the canal so that turning right along the canal bank would lead us to the bridge. So I didn't even bother trying to remember the way we had come in case we had to retrace our steps. 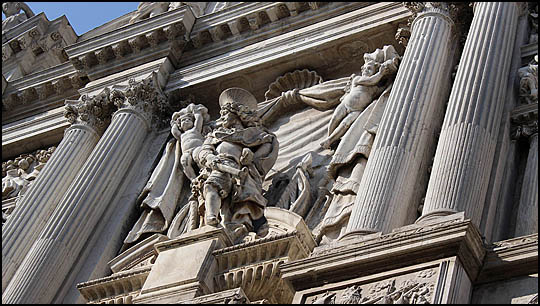 What a shame, all those empty niches on the fronts of English cathedrals and churches where statues of saints and notable achievers have been stripped away. By comparison these Venetian churches are alive with figures. 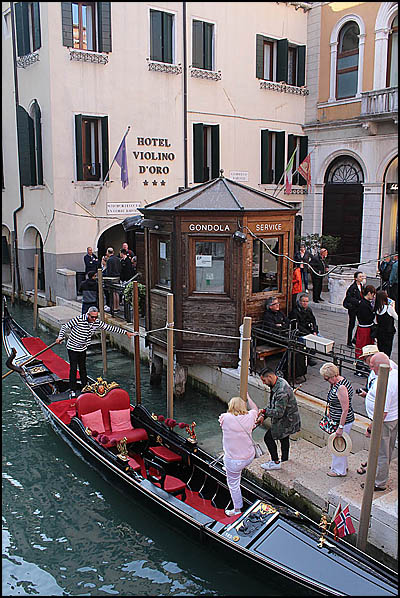 A gondola hire point. There are some 400 gondolas on the canals of Venice and numerous places where you can get one. 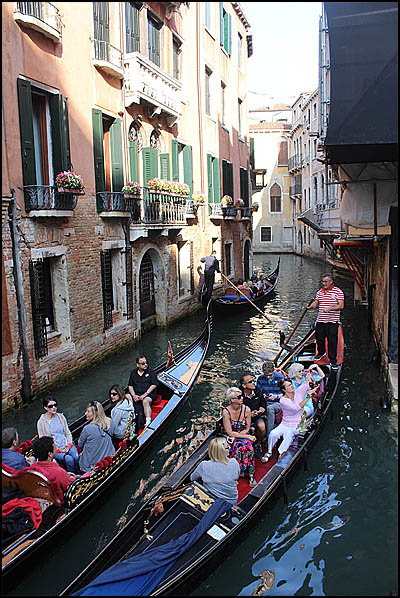 They frequently come up against a small traffic jam! Think, then what it must have been like a few centuries ago when eight to ten thousand gondolas vied with lots of other boats for space on Venice's waters. 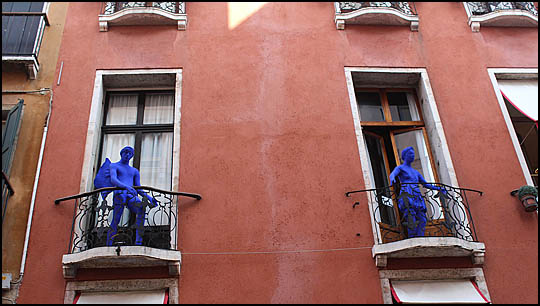 There are other sights to find when wandering the streets of Venice. It pays to look up as well as down, as you cross the bridges over the canals. 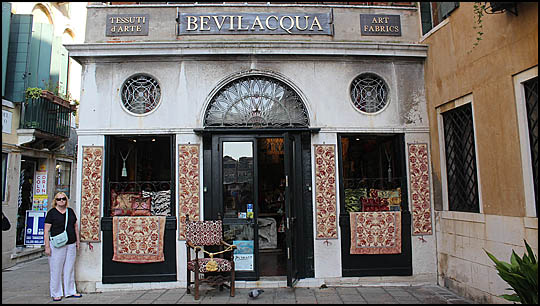 A carpet and soft furnishings shop with rugs and wall hangings as well as cushions and chair coverings. We bought some postcards in the shop in the background. A fortnight later, they haven't arrived yet... 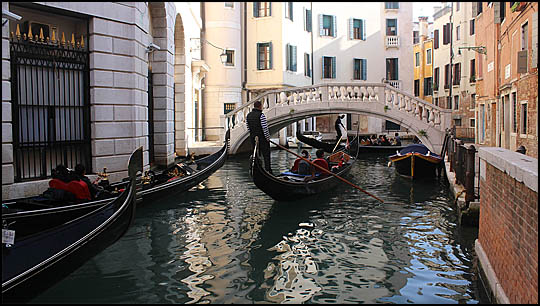 Another bend in the canal and another queue for an unseen obstacle or bottleneck. The gondolas are rowed with the single oar. The canals are too deep for the gondoliers to use a punt. Although there is only one oar the nose of the gondola is kept on course by the use of a strong forward stroke followed by a short backstroke which swings the nose back round. 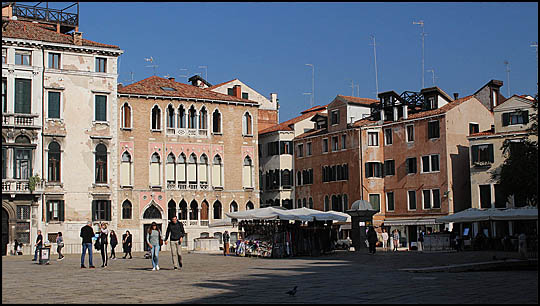 We come to an open space. Most of these are described as a campo or piazza. Venice only has one square and that is St Mark's Square. This is Campo Santo Stefano. The church was 13th century but Fran was more interested in the market stalls! 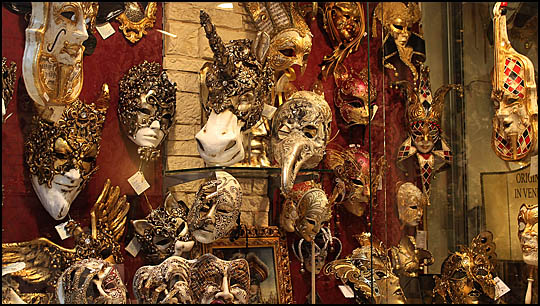 Shop windows are always interesting to look at. They make the most of the space available. You will find lots of Murano glass - Murano being one of the islands of Venice where the glass is made. It was the only island where glass furnaces were allowed in the days of mainly wooden buildings. This shop has a display of carnival masks. 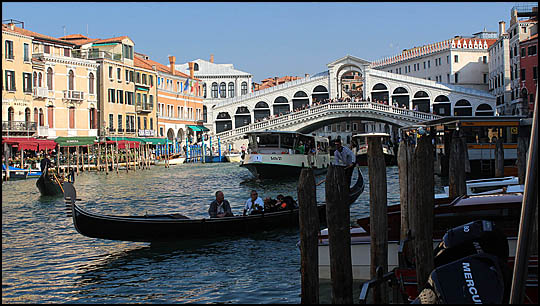 As expected we came out onto the Grand Canal, a short distance from the Rialto Bridge. We found a cafe on the waterfront and they made our favourite latte macchiato. Forget Starbuck's mis-use of the name - in Italy a latte macchiato is what we would call a latte in the UK. "Latte" means "milk" in Italian. Ask for a "latte" and you ask for a glass of milk...

In the next article we will take a closer look at the bridge and then make our way back to St Mark's Square and the Doge's Palace.