Are these still going? I have a feeling they might be actually. Unlike many of the sweets I enjoyed as a child. 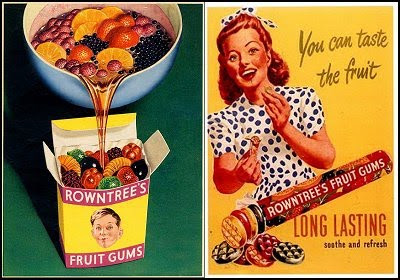 Some of them just changed name - like Marathon becoming the slightly disturbing Snickers, or Opal Fruits (didn't like them - they used to make my mouth water...) becoming Starburst. A snazzier name it may be but Opal Fruits described them better and even after however many years it's been I can still remember the song...

Ooh ah... Come on now, admit it... how many of you were singing along? How many people can sing the Starburst song??? Is there even a Starburst song?

And whatever happened to Spangles, Tiffin, sweet cigarettes and a stick of licorice in a quarter pound of kay-li? Or Space Dust from the 1970s - now that was a surprise, the first time I tried it!

Anyway, Fruit Gums! Remember the satisfaction when your teeth finally met in the middle of one?
Posted by John Burke at 16:07