A bit of good news yesterday when I found one of my photos had won Best Overall Photograph in a photo competition at work. 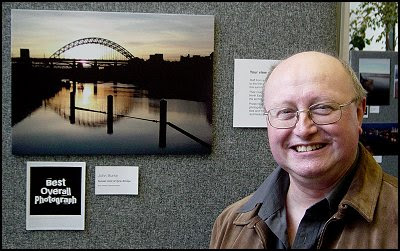 This was the first such competition organised by the University of Northumbria and I suspect there may be more entries next time... But, having said that, I don't want you to get the impression that it was the best out of only three entries or anything! There were some excellent photos on display in the foyer of Northumbria's Ellison Building in Newcastle and I'd not have liked to have been the judge! 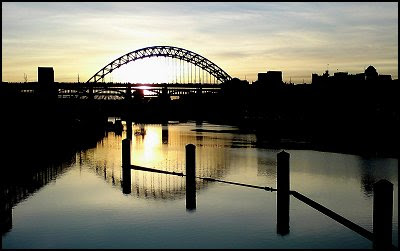 I like to think of myself as a serious photographer so it's perhaps a little embarrassing to have to admit that this was taken on my phone! It shows the Tyne Bridge silhouetted against the sunset and was taken as I crossed the river on the Millenium Bridge.

Thanks to Northumbria University and their judge for excellent taste and to Janette Hillicks for wielding the camera to take my photo with my photo for the photo ...er... at the top of the page!

Thanks also to Northumbria for the Boots gift voucher that was the prize. Miss Franny has now given me a list of things to buy with it... She has allowed me to spend some of it on myself too! The list includes razor blades...